This year’s Chess Festival was organized by the greatest woman chess player of all time Judit Polgar. The festival offered a full day family programme in the Budapest Palace of Arts.

Children had a chance to enjoy the Diverse Arts & Crafts activities in the spirit of chess. The activities were organized in co-operation with CeramiCafe, Happy Kids International Kindergarten, PlayMais and Poli-Farbe.

At the Chess Palace Promenade kids enjoyed in interactive games, contests conducted by teachers and chess instructors. The children’s favorite Chess Song and a spectacular Chess Dance, choreographed especially for the occasion were presented on the stage.

In the name of the 40th Anniversary of the Rubik’s Cube, Erno Rubik, the inventor of the famous Cube was also present at the festival.

Among the prominent guests were also world champion athletes, artists, and leaders of the business and political world. 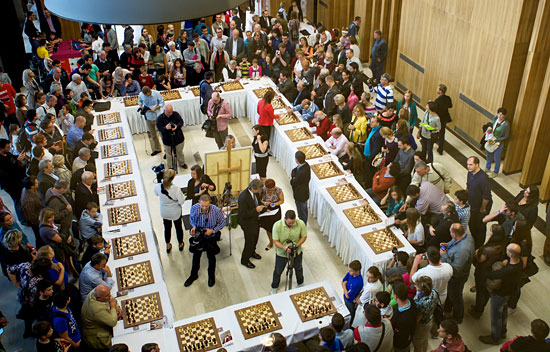 The festival ended with an exhibition simul given by Judit Polgar who has been leading the FIDE world rankings for 25 years setting a Guinness record also announced at the festival.

Report courtesy of ECU, more information on the official website