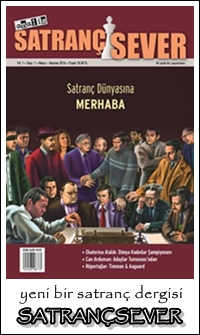 A new Turkish chess magazine with was born recently with the name “Satranç Sever” (literally translates into ‘Chess Lover’). The magazine is scheduled to be bimonthly and published by the founder and the owner of the first Turkish chess publishing house Analiz Publishing, FM Alper Efe Ataman, a renowned chess personality in Turkey and a top trainer in the country.

Turkish chess is associated with an incredible chess boom especially at the scholastic level for the last two decades. There seven grandmasters but the domestic chess circle has always debated about the lack of a great chess magazine, which would contribute to the development of a sophisticated chess culture.

Currently, there is only one chess magazine published by the Turkish Chess Federation to cover national and international events circulated three times a year. However, the founder and owner of the first chess publisher of the country is dedicated to change this fate.

FM Ataman explains the idea of the magazine saying, “Publishing a chess magazine has always been one of my dreams”, pointing out the past experiences of publishing private chess magazines have not been very long-living. He gives credit to the other chess magazine published by the federation, but still believes that there is a need to have another voice other than that of the federation, an independent high-quality magazine, “emphasizing mostly on chess culture”.

The first issue includes articles by Turkish GM Kıvanç Haznedaroğlu and top female player of the country IM/WGM Ekaterina Atalık and incudes interviews with GM Jan Timman and GM Jacob Aagaard. The magazine also contains a chess cartoon by Andrés Guadalupe Martín. GM Aagard talks about chess publishing and chess training-improvement matters, a novel material for many chess lovers who do not necessarily read or speak English, Russian etc. It should also be pointed out the renowned chess photographer David Llada and cartoonist Andrés Guadalupe Martín have also contributed to the magazine.

FM Ataman also explains that the magazine aims to show chess is not only for the scholastic level but the uniqueness of chess is that it is game that unites different age groups. Therefore, “creating an interesting magazine for all levels and ages” is what FM Ataman is aiming for, intently quoting GM Jan Timman “a mixture of good journalism and good analysis.”

Ataman founded of Analiz Publishing back on December 1, 2005 which may be dubbed as the first real chess publishing house. Analiz has published 34 different chess books (there are translations and originals). It is also the distributor of renowned international chess publishing houses including Gambit, Everyman, New in Chess, Quality Chess and Chess Informant.

Analiz also has a chess club in İzmir, Bostanlı founded on March 1, 2009, where Ataman is training youngsters. Ataman’s book “Instructive Chess Miniatures” already published in Turkish is set to be published in English by Gambit Publications.

You can visit Analiz’s website, only in Turkish, at http://analizsatranc.com

FM Alper Efe Ataman was born in 1983, Izmir and has been a member of the Turkish Youth National Team Trainers, has a FIDE Trainer title, too.