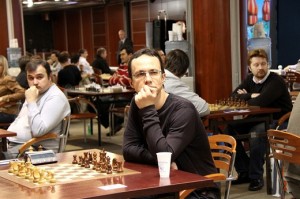 The second decisive day has beguan

The rapid qualifier of the Aeroflot Open has started its second day of competition. Six players came in today’s round with a perfect score, but only one of them has been able to win his first 2 games, Azerbaijani GM Rauf Mamedov. There is also only one player who has achieved 1.5 out of 2 in these rounds, GM Sanan Sjugirov, who now stands in sole second place.

Mamedov’s first victory was against GM Shekhar Gangluy with the white pieces. It took 72 moves to break the resistance of the Indian. The game finished in a position where  white has mate in two despite the fact that his opponent will soon promote his a-pawn to a queen.

The second win had a totally different nature. The Azerbaijani played a sharp Sicilian Defense to defeat GM Anton Korobov with a direct attack against his king. Black kept his king in the center in order to organize a strong kingside attack with the help of a rook on the g-file. Korobov resigned on move 30 when Black not only had won an exchange but also maintained very strong attacking chances.