Grandmaster and Asian champion Parimarjan Negi got off to a good start in the AICF-AAI Chess Cup holding top seed Radoslav Wojtaszek of Poland to a draw here at the AAI institute.

Round 1 video by Vijay Kumar

The first round provided exciting games in the highest category tournament of the country with Abhijeet Gupta holding out Krishnan Sasikiran to a draw while Ukrainian Anton Korobov also signed peace with Evgeny Alekseev of Russia.

It was a tense affair for Negi after he made a slight error in the endgame arising out of a Grunfeld defense. Playing black the Indian said he was quite satisfied with his preparation. “I played a home-cooked idea which worked quite well for me in the middle game as I equalized quite easily. It should have been an easy draw but I made this slight error that gave Radek (Wojtaszek) some chances. 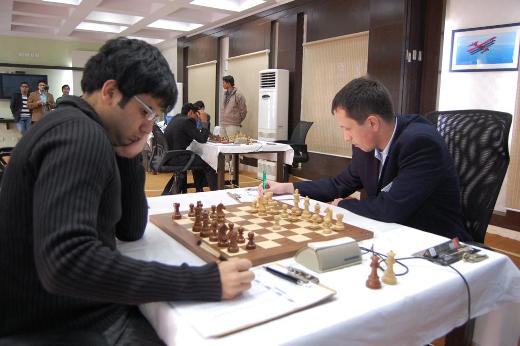 As it happened in the endgame, the Polish GM tried hard but could not really make an impact after running short of time. The game was agreed drawn after 50 moves when it was no longer possible to penetrate through the fortress.

Abhijeet Gupta played the most exciting game of the day but the Indian conceded that it was just a blunder that led to complexities. Playing the white side of a Chabanenko Slav, Abhijeet got a symbolic advantage out of the opening which grew after Sasikiran parted with his light Bishop for a Knight.

“I was thinking that perhaps I was slightly worse but his plan allowed me to get a level position just while I was a little worried”, said Sasikiran after the game. 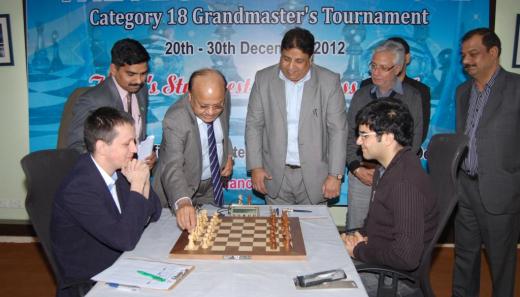 The Opening Move of the event

With correct chess Abhijeet should have gone for the draw which would have been a just result out of a lifeless position but looking for more, Delhi-based Gupta missed the thread of the position and found himself staring at defeat after blunder a rook for minor piece.

“I just did not notice I was losing the rook and by now we were also both running short of time. I thought it was over but just hung on and then Sasi did not play precisely”, Gupta noted matter-of-factly.

The fortunes did not fluctuate any more. As Gupta was back in the game with some tricky play. Sasikiran sacrificed the extra material to remain a pawn plus but the game had transposed to an opposite colour Bishops ending by this time. Gupta was under pressure but he gave another pawn to wriggle out of problems and the players split the point in 52 moves.

Anton Korobov thought himself to be slightly better but in the end he was the one fighting for the half point against Alekseev. From a Sicilian defense, Alekseev got a level position as white and subsequent exchangges led to a balanced endgame.

Alekseev won a pawn with some skilled maneuvering but Korobov hung in there making some exact defensive moves. The players repeated the moves to share the point after 42 moves. 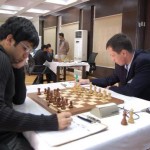 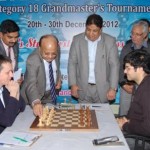 The Opening Move of the event 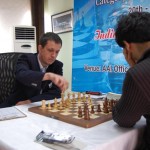 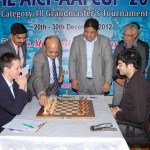 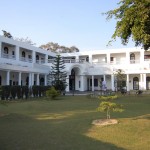 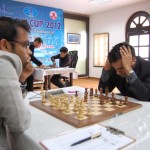 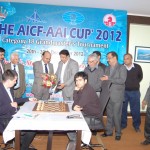 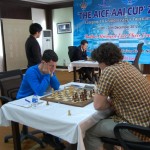 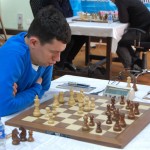 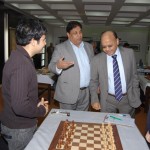 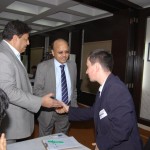 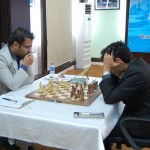 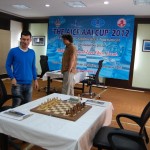 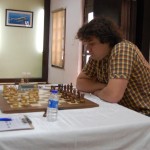 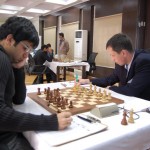 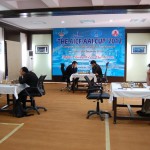 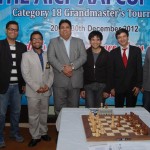