Grandmaster and Asian Champion Parimarjan Negi crashed through the defenses of fellow Indian Krishnan Sasikiran and emerged as joint leader after the end of the second round of AICF-AAI Chess Cup now underway here at AAI institute.

Round 2 video by Vijay Kumar

After a hard-earned draw from a difficult situation in the opener against Radoslav Wojtaszek of Poland, the Delhi-based Negi showed top class preparation complimented with excellent decisions to score his first victory in the tournament.

Wojtaszek meanwhile outclassed Evgeny Alekseev of Russia amidst complexities to emerge as the other winner in the day while Anton Korobov played out a draw with former World junior champion Abhijeet Gupta. 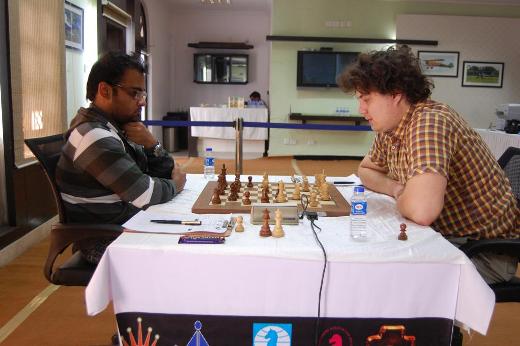 With eight rounds still to come in the six-players double round robin tournament Negi and Wojtaszek share the lead with 1.5 points apiece and they are now followed by Gupta and Korobov who both have a point in their kitty coming from two draws. The fifth spot is shared by Sasikiran and Alekseev on half a point each and these two already have some catching up to do in the category-18 event.

Negi capitalised on an erroneous opening plan by Sasikiran to get the upper hand. The Ruy Lopez Breyer by Sasikiran did not yield desirable result as Negi had a vice-like grip on the position and he meticulously deployed his forces to increase the advantage.

When the first time control approached Sasikiran already was in serious difficulties and he found some solace in giving a Rook for a Bishop. However, the counter-play remained elusive for the rest of the game as Negi showed fine technique to pocket the full point in 43 moves. 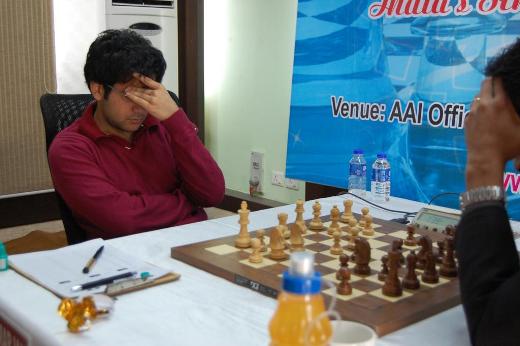 Negi during match against Sasikiran

“It was a complicated opening where I think he did not play the best moves and I was able to get some advantage, later when he gave the exchange it was already a very difficult position for him”, said Negi in a post-game chat.

Wojtaszek showed his true mettle against Alekseev. The Capablanca variation in the Nimzo Indian defense gave the Polish Grandmaster enough dynamics that he had hoped for and Alekseev was not at his best in finding the reposte.

A well-calculated sequence of moves gave a dangerous attack to Wojtaszek and he made most of his opportunities to clean up the king side pawns. With his King looking for the cover, Alekseev had little time to do anything else and he was gradually grinded. 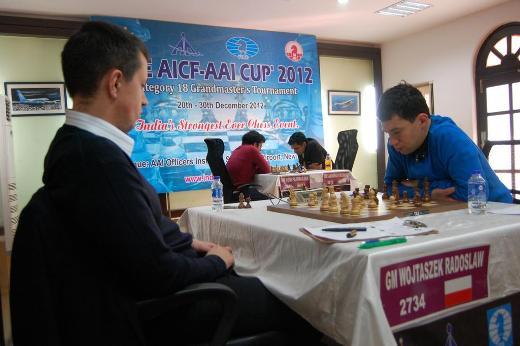 “’I think I could have finished the game earlier but somehow I could not, Alekseev went for a passive defense which was not good, instead I feel he could gone for something more active”, said the second of World champion Viswanathan Anand in the last three world championship campaigns.

Abhijeet Gupta had to suffer a long time before he could salvage a draw against Korobov. The Grunfeld defense by Gupta gave him a reasonable position and an over-the-board inspiration gave the Indian a defensible endgame.

However, Gupta missed easier chances to equalise and had to fight a long-drawn pawn-less endgame which was theoretically drawn. Korobov tried hard and long but the Indian kept finding the resources. The game was drawn after 87 moves. 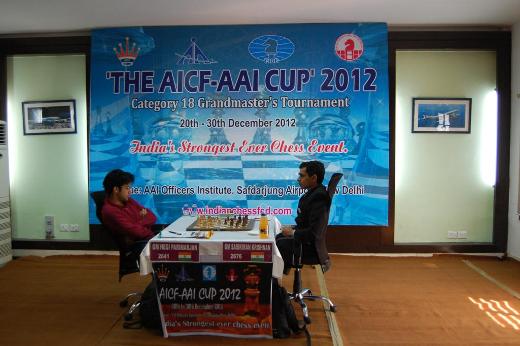 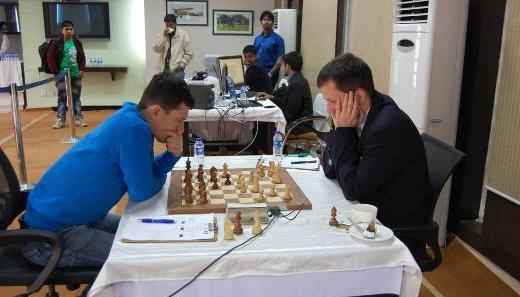 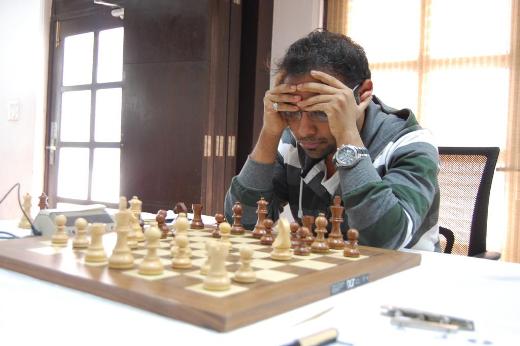