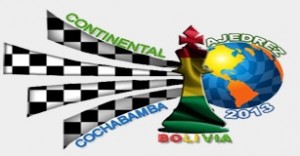 The American Continental Championship 2013 will take place on 6-15 May in Cochabamba, Bolivia.

The tournament will be open to any participant that represents a Federation that belongs to the American Continent that is registered as a FIDE member.

The tournament is part of the World Championship cycle and the top four finishers will qualify to the FIDE World Cup 2013 in Tromso.

The prize fund will total 20 000 US dollars, that will be distributed as follows: