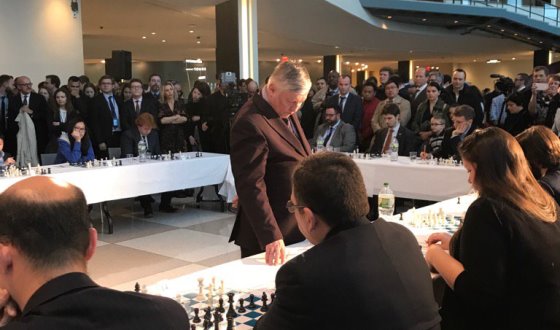 The permanent mission of the Russian Federation to the United Nations organized a simultaneous exhibition with former world chess champion Anatoly Karpov.

The simul was held in the General Assembly building in front of a huge crowd. Karpov reminded that he had held a simul at the UN headquarters 46 years ago.

Diplomats from Azerbaijan, Monaco, Netherlands, Poland, Portugal, Russia, Czech Republic, the staff of the UN Secretariat and two students from the New York Chess School formed a 15-board row.

The simul lasted around 90 minutes, Karpov won fourteen games and the talented 15-year-old Nancy Van earned a draw. Karpov noted the “very decent level” of some other rivals.

Karpov also had a brief meeting with the Secretary-General of the United Nations Antonio Guterres.