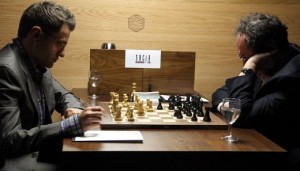 The second round of the Candidates Tournament is under way. The most expected game of the day between Magnus Carlsen and Vladimir Kramnik finished in a 30-moves draw.

Aronian accepted to play with an isolated pawn in the center, but mobilized his pieces correctly, putting pressure against Gelfand’s position. On move 25 the Israeli made a mistake with Rc8; this move looked like a good simplifier to equalize, but instead fell under an effective tactical shot by the Armenian.

The resulting ending was clearly in White’s favor and resignation came on move 35.

In the post-game interview with IM Lawrence Trent, Aronian said:
“The opening line was considered to be drawish. White has only microscopic advantage, normally I seek for more, but in this tournament I want to be solid.
I had a feeling that black’s 17…Rfd8 was premature, after 18. Nc4 black is somehow tied up. I didn’t like 24…Bd8, I expected 24…Rc8 then 25. Ra1 a6 and maybe 26. Ra4.”

Peter Svidler was Grischuk’s second during the last Kazan Candidates tournament, but this time had to face him in a direct match. The players examined the well-known lines of the Ruy Lopez and signed the peace treaty on move 41.