While the just ended FIDE Zone 4.2 Africa Chess Championship Open winner, IM elect Arthur Ssegwanyi was the biggest beneficiary from the event, there were many individual winners who attained titles, hefty cash prizes and others gained rating points and invaluable experience.

It was therefore not a case of winner takes it all at City Oil, Kira Road as the event climaxed on Saturday 25th April 2015.

Ssegwanyi is now already warming up to the mouth-watering trip to the 2015 World Chess Cup in Baku, Azerbaijan later this year as one of five African representatives.

The others being the winners of the Zone 4.1, Zone 4.3, Zone 4.4 and the winner of the upcoming Africa Individual Chess Championship to be held in Cairo, Egypt at the beginning of May. 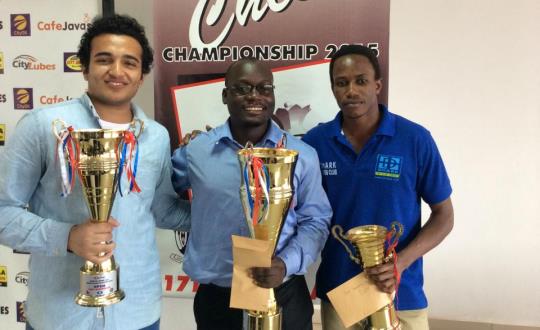 Among all these, Buti was the unsung hero. He not only conquered Egyptian Grandmaster El Gindy Essam at his first time of asking in a major international event but also finished with 6 out of 9 points, a score that grants him the much coveted FIDE Master title.

Wanyama, who had a slow start and played way bellow his full potential eventually came good in the final round when he became the second Ugandan to beat Grandmaster El Gindy in the same event.

CM Haruna Nsubuga should count himself as the most unfortunate player in this zonal. While he finished in joint fifth position with GM Essam, IM Emojong and Ethiopia’s Mesfin Leykun and picked up a share of the cash prize, he missed out on attaining a valuable FIDE Master title owing to a wrong decision during his last game against Kenya’s Ken Omolo.

During that game, which Uganda’s Nsubuga lost, there were clear drawing chances but Haruna opted to play for a win, only to lose the game yet a draw would have propelled him to 6 points out of 9 and granted him a FIDE Master title! No amount of cash prize can compensate for a title. Losing such a chance of attaining it on home soil implies need to pay much more to travel to overseas events for a shot at gaining the title.

A total of 4500 Euros was given out to the winners in the Open and Ladies’ categories. 7 countries participated in the event and the top ten out of 22 participants in the Open were as follows:

The ladies category was won by Egypt’s WCM Ehab Tasneem who is now destined to become a Woman International Master. She picked up 8 points out of 9. She was followed by Uganda’s Grace Kigeni with 7 points, a performance that grants her a Woman FIDE Master title.