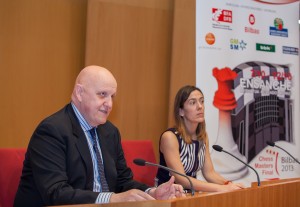 Presentation of the Bilbao Final Masters 2013

Bilbao Final Masters 2013, the top competition of the Grand Slam Chess Association, is going to take place 7-13 October in Bilbao, Spain. The participants in this year’s edition are Levon Aronian, Vachier-Lagrave, Shakhriyar Mamedyarov, and Michael Adams. The format of the event will be a double round robin.

The organizers have expressed their satisfaction from the field, despite the absence of Magnus Carlsen and Viswanathan Anand who are preparing for the World Chess Championship 2013 (ed: official site launched http://chennai2013.fide.com/). Adding more players to the field was also hindered by the coinciding as dates event Kings Tournament 2013.

The Bilbao Final Masters takes place right before the long awaited European Club Cup 2013 in Rhodes, where most players from the 2700 club will face each other in the strongest team competition of the year. Two of the Bilbao participants are playing there. Vachier-Lagrave is heading the 9th seeded team of Clichy, while Shakhriyar Mamedyarov is 7th(!) board of the top seeded Socar. See all clubs and participants here

The European Club Cup 2014 will take place exactly in Bilbao and is expected to continue the tradition of being the top club event in the world.

Four of the best international players this year- the Armenian and current Olympic champion Levon Aronian, the Frenchman Maxime Vachier-Lagrave, the Azeri Shakhriyar Mamedyarov, and Brit Michael Adams will all star in the Masters Grand Slam Final VI, one of the world’s most prestigious chess tournaments, which will be played in Bilbao between the 7th and 12th of this October.

Now in its sixth edition, the Bilbao tournament adopts a square format, being out at the last minute two of its regular players: the current world champion Indian Viswanathan Anand, and number 1 world ranking Norwegian Magnus Carlsen (also champion of the last two editions of the Bilbao Final). Both were unable to reconcile the dates of the tournament with the competition for the world crown that will put them face-to-face in the coming days.

Despite these last minute absences, the roster presented by the Bilbao Masters Final 2013 is one of the best chess rosters of today. Formed by four international grandmasters, who have reaped the best results over this year; even in the absences of Anand and Carlsen, who have focused on their preparation for the World Championship; as has been pointed out by the director general of Bilbao Ekintza, Nora Sarasola, and committee spokesman organizer and commentator of the competition, Leontxo Garcia during the presentation ceremony of the sixth Grand Slam Final.
The reigning Olympic champion and No. 2 world ranking, Armenian Levon Aronian, won this year’s prestigious Alekhine Memorial Championship in Paris and St. Petersburg.

The Azeri Shakhriyar Mamedyarov, who’s the only chess player in history to win world junior championship twice, has meanwhile also took the title, at the Grand Prix in Beijing.

The Frenchman Maxime Vachier-Lagrave, also world champion under 20, was a finalist a month ago for the World Cup played in Norway, beating main figures on the way.

Finally, the Brit Michael Adams, world-champ runner-up in 2004, a few months ago won the tournament in Dortmund (Germany), a major international chess event.

The Final will be played as a double round robin, according to the new and revolutionary rules that distinguish the tournament of Bilbao from the rest of the international tournaments of the world, to ensure each game is entertaining. Thereby, the so called, “Sophia rule” will be applied which states that only the referee has the authority to determine whether a game is drawn, avoiding pacts between players. In addition, a scoring system similar to football will be used, with three points per win, one for a draw and zero for a loss, a system first used at the Bilbao Masters Final 2008, an elite tournament which lead to the system’s name the “Bilbao Rules”.

Unlike the last three editions, in which the Masters Final was played together in Bilbao and alternatively in Shanghai and Sao Paulo (the last two years), this 2013 sporting event will only be played in Bilbao. The tournament headquarters also moved this year from the Alhóndiga to the central atrium of the Mercado del Esanche.

The last minute absences of Anand and Carlsen due to conflicts with the dates of their up-coming showdown for the world crown, as well as the inability to readjust and move the tournament schedule other planned events in Mexico City have made it equally unworkable to share the Masters Final VI with the Mexican capitol. Mexico City, one of the most advanced world capitols has been in negotiation to share the organization of the tournament with Bilbao.

In 2014, the city of Bilbao will not only host the annual Grand Slam Chess Masters Final but will also be the host of the European Chess Cup for clubs.

Last week, The European Chess Union (ECU) awarded the prestigious 2014 tournament to Bilbao and considers that the Basque candidate “meets all standards of excellence at both a sporting and logistical level-for its proven experience in the annual organization of one of the most important chess tournaments in the world: the Grand Slam Chess Masters Final, and the quality of its tourism, culture and hospitality “.

Bilbao’s bid, submitted by the chess club Bilbao E-4, with the support of the City of Bilbao, beat three other international applications.

The Continental Chess Champions League will meet in the Biscay capitol in the middle of next year, with the best players in Europe and worldwide enrolled in the most powerful clubs in Europe. It is estimated that registered chess clubs will reach into the hundreds, with both males and females; creating a group that will be an interesting benefit for the city in both sporting and economic terms.