The most important news coming from Azerbaijan is that the captain of the national team Vladimir Tukmakov will not invite GM Rauf Mamedov to play at the upcoming European Team Chess Championship. He will be replaced by GM Eltaj Safarli.

“This decision has been taken based on not only Rauf’s performance in the World Team Championship,” Tukmakov explained. “The results he showed in Baku Open, World Cup and Governor’s Cup in Khanti-Mansiysk were taken into account. Yes, he failed in China, but I would not take a decision based on just one tournament. It turned out that the crisis was deeper than I expected.” 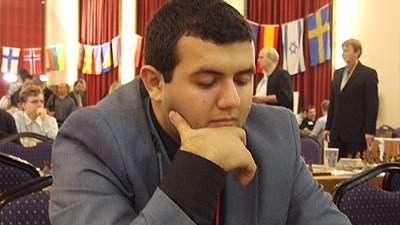 GM Rauf Mamedov at the 2007 ETCC in Greece

Mamedov, who was member of the national team for the last seven years and contributed to the gold medal at the previous ETCC in Novi Sad, said that the captain took the right decision.

“I have played badly as of late and generally took the news okay. Now I have to improve the results to return to the team,” Mamedov said.

“What is my vision of a way out of the crisis? One needs not to lose optimism and work even harder. In general, every chess player can face a downside. The players of our team have also experienced this. The main thing is not to give up”, he added.