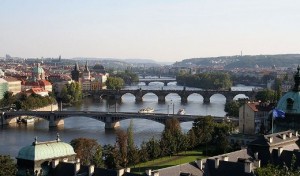 The bridges of Prague

From Friday to Tuesday again, you will have the possibility to play 5 days rapid chess tournament in a specially launched train and to see several nice towns – ancient Regensburg, Innsbruck sunk in the Alps, thereafter Mozart´s Salzburg and also two most beautiful Czech towns – Český Krumlov and Prague.

– 13-rounds rapid chess open tournament by Swiss System
– rate of play: 2x 20 min with increment of 10 s per move
– number of participants limited by the capacity of the train (the organizer decides about the acceptance based on the order of received applications)
– all games are played in the train

The exact departure times (every day at about 10 a.m.) and the train stations will be specified. The schedule of individual rounds on particular days as well as the location of train stations may be changed according to the actual situation on the railway.

Organized by the Prague Chess Society in cooperation with Czech Railways
Director of the tournament: Mgr. Pavel Matocha