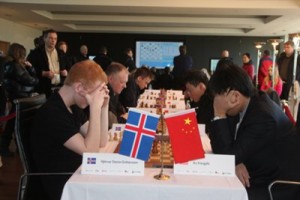 China vs Iceland at Reykjavik Open

The rapid match between China and Iceland which was held in the headquarters of Arion Bank finished this weekend with a convincing 47,5-24,5 victory for the guests from China. China outrated Iceland this weekend and outclassed them taking charge early with a 5,5-0,5 victory in the 1st round. Iceland faired better in the 2nd round but another 5,5-0,5 thrashing in the 3rd round set the tone for a smooth sailing for the Chinese.

The match was held to commemorate the 60 year anniversary of the Chinese-Icelandic Cultural Society which in conjunction with the Icelandic Chess Federation organised the event with the sponsorship og Arion Bank, CCP, Promens, Icelandic and Elkem.

Given the timecontrol some upsets were to be expected. Lenka Ptacnikova managed to beat the super GM Bu Xiangzhi and Mikael Johann Karlsson managed an upset vs Wang Yiye.

Even though the match was one sided it had exciting invidiual matches and several people showed up over the weekend to watch the action in the Arion Bank headquarters near the seaside.

For the Chinese, the young super GM Yu Yangyi showed great fighting spirit and quality and finished with a very impressive 11,5 out of 12. For the Icelanders the top scorer vs GM Hjörvar Grétarsson with 5,5 out of 12.