The 64th World Congress of Chess Composition (WCSC) is in full swing in Fujairah, UAE. The first day of the World Solving Chess Championship saw FM Bilguun Sumia (pictured below) from Mongolia grab the lead. The member of the Mongolian chess national team he pulled a half-point ahead of the World Champion in solving Danila Pavlov and Nikos Sidiropoulos.

In the interview after the first day of solving, Bilguun said he was happy with his result, and his goal was to become the first GM both in chess and in solving in the history of Mongolia.

Before the final round, however, Piotr Murdzia from Poland shot ahead with 55.25 points, just 0.25 points ahead of his closest rival, Ural Khasanov. Boris Tummes and Danila Pavlov shared third place and were not far behind. In the last round, the reigning champion, FIDE solving GM Danila Pavlov (FIDE) showed his mettle. He produced the best result and won the championship, scoring 84.5 points.

The 19-years-old Pavlov won the World Chess Solving Championship for the second time in a row. He also won all three additional solving competitions with different formats, which took place in Fujairah during these days and delivered a tremendous overall performance.

Poland took gold medals in the team competition with 162.75 points, while Serbia came second with 153.75 points. Germany finished third on 138.75.

64th World Congress of Chess Composition culminated in the WFCC Presidium election session, which took place on the 17th of November. There were two candidates for the position of the President of WFCC – Marjan Kovacevic (Serbia) and Thomas Maeder (Switzerland). With 13 votes versus 9 votes, Marjan Kovacevic became the new President of WFCC. Mr Kovačević has been FIDE Grandmaster in composition since 2007 and Grandmaster in solving since 1988. In previous years he held the position of WFCC Vice-president. 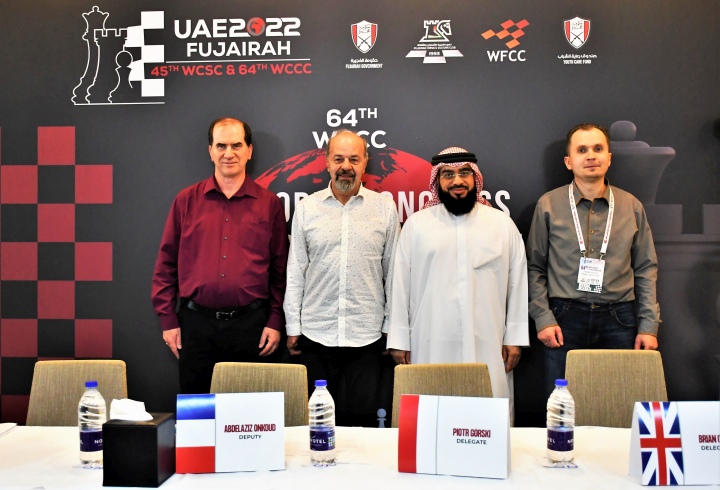 The program continues with the WFCC Closing Session and the closing ceremony, followed by the international blitz tournament, which will take place on the 19th of November. More than 270 players have already registered there, including GM Salem Saleh, GM Pavel Eljanov, and others. The total prize fund for all events is €40,000.