FIDE and India agreed this March 15th that the Chess Olympiad 2022 will be moved to Chennai. Initially, it was set to be played in Belarus, but following the wave of protests against Alexander Lukashenko and the support of the Belarus Chess Federation for the protests it was obvious that a change was needed.  Last April Russia campaigned through the state agency TASS to become the new venue, a move supported by FIDE President Arkady Dvorkovich and RCF President Andrei Filatov. It would have been the first time in history for a country to hold two consecutive Olympiads. Read the story of the Russian bid here However, with the Russia-Ukraine war in full swing, another change of venue was necessary. Chennai as a new venue was signed today by Bharat Singh Chauhan and Arkady Dvorkovich. “Dream accomplished!” shared Bharat Singh Chauhan. Congratulations, India!

A FIDE delegation headed by its President Arkady Dvorkovich has paid a three-day visit to India. The purpose of the trip was to inspect the proposed venue for the 44th Chess Olympiad, discuss the road map for the event, and sign the contract with the All India Chess Federation (AICF). The FIDE President also held a round of meetings with all the relevant authorities whose support has made this event possible.

AICF President Sanjay Kapoor and Tournament Director and AICF Secretary Bharat Chauhan, along with District Collector, AR Rahul Nadh, escorted the FIDE delegation to the venue for the upcoming Olympiad in Chennai on March 31. All the operational aspects of the Olympiad were discussed in detail between the FIDE representatives and the local organizing committee. Later that day, Dvorkovich met with Siva. V. Meyyanathan, Minister for Youth Welfare and Sports Development Government of Tamil Nadu, and Dr R Anandakumar IAS, Member Secretary Sports Development Authority of Tamil Nadu.

Indian chess grandmaster and five-time World Chess Champion Viswanathan Anand, who was also present at the event in New Delhi, said, “I am delighted that the 44th FIDE Chess Olympiad will take place in Chennai. I would like to thank the Tamil Nadu Government and especially Chief Minister Thiru M.K. Stalin and everyone else who has played a part in bringing the competition to India. I would also like to thank FIDE and FIDE President Arkady Dvorkovich. And also credit must be given to All India Chess Federation (AICF) for moving very fast and I am confident that the competition will be a great success.” 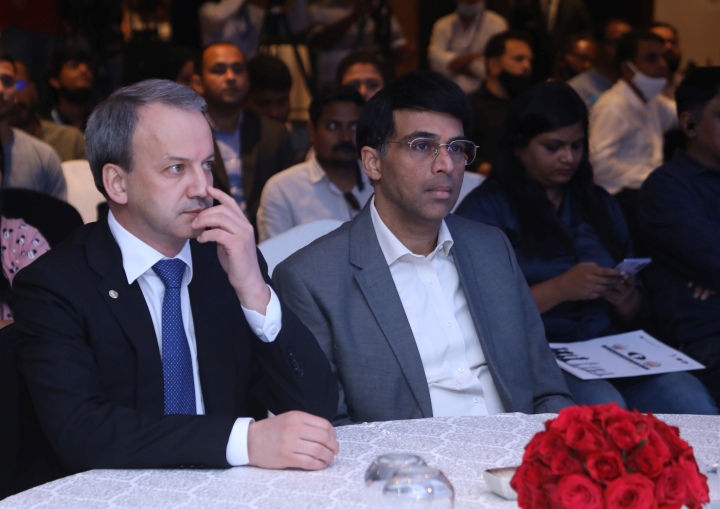 The President of All India Chess Federation Dr. Sanjay Kapoor said, “Today I am overjoyed and as the President of AICF, I would like to share this joy with the people of India. The FIDE World Chess Olympiad has never been hosted in India, but in 2022, the long wait is finally over. It’s a matter of pride for the entire country to host this event. Going by the number of countries participating in the tournament, it will be the biggest sporting competition ever hosted in India.”

The Tournament Director Bharat Singh Chauhan added, “This is a historic moment for the All India Chess Federation (AICF) and all of us. This is going to be the biggest sporting event hosted by India. We are expecting participants from 160-190 countries to take part in the competition. We are going to host this event with the support of all chess players.”

After the public act, the AICF representatives and the FIDE President were invited to a private reception with the Honourable Chief Minister of the Tamil Nadu Government Thiru M.K. Stalin. Mr Stalin, who was the mayor of Chennai in the period from 2009 to 2011, and had previously been 1st Deputy Chief Minister from 2009 to 2011, has backed the project from the very beginning. Without his decisive support, bringing the Olympiad to Chennai wouldn’t have been possible. 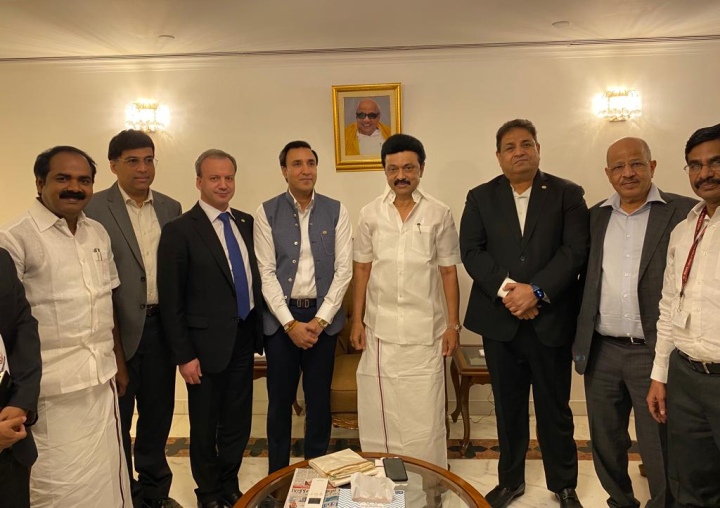 Chennai will also host the FIDE Congress 2022. According to the FIDE Charter, the elections of the FIDE leadership should take place there.

During the press conference that followed the signature of the contract, Arkady Dvorkovich announced his decision to run for a second term. He also announced that five-time World Champion Viswanathan Anand will join his team.