I have great respect for the experts in the field of chess problems, though I never was a great fan. All those terms and themes sounded distant and difficult to understand. Instead, I preferred the practical aspects of playing chess. However, while writing for different newspapers, I witnessed a great interest from readers for two-movers. The common question being – “Why are you not including chess problems?”

What I always wanted was one book that would explain everything and provide the best examples from the history of chess problems. I asked the guru of the chess problem community, GM of chess composition and GM solver Milan Velimirovic, whether such a book was possible and unknowingly tapped into his lifetime wish to create just that.

Many months later, we are proud to present “The Definitive Book, Encyclopedia of Chess Problems: Themes and Terms”, written by Velimirovic and his colleague, GM solver and 1984 World Solving champion, Kari Valtonen from Finland.

Inside, there are 1,726 selected problems and all the answers to any question that one might ask about chess problems. It can be read in different ways, like the classical Larousse encyclopedia or as a great collection of problems. Every theme and term is illustrated with the appropriate problem.

I am proud to be involved in this project. I see it as a historic moment for the world of chess problems. And, yes, now I a full-fledged fan of this magnificent field!” 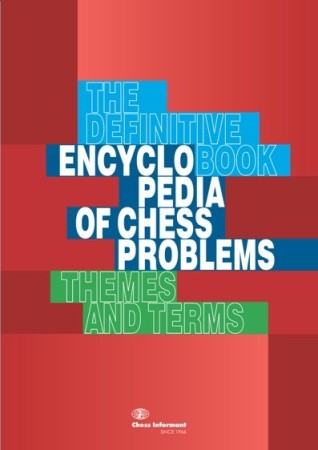 A must in the Library

A lot of courage was needed to undertake, within an extremely tight time table, the “impossible mission” of coping with such a comprehensive task as displayed in this book, which covers practically all aspects of chess composition.

Behind this there stood a special situation, where the general manager of “Chess Informant” has found it in his interest to invest in such a project, provided that the chief editor is GM Milan Velimirovic. And indeed, one could not ask for a better qualified man for the job. In a lucky coincidence, Kari Valtonen who happened to gather a lot of material suitable for the book joined forces with Milan and these two with the help of several enthusiastic friends managed to present us with this mammoth enterprise – the encyclopedia before you.

Every fan of chess composition can find in this book some thing of interest. The undersigned finds appeal in most aspects of the book, but being biased by his personal composing activity, particularly so in the core parts referring to themes and terms. For the undersigned, browsing through these extensive parts has been a fascinating “journey among the stars”.

Nowadays it seems that the time of basic themes is over. The time of the more complex themes has come, but these must preserve a number of basic characteristics: internal coherence and logic, a high prospective for inspiring composing and a strong survival capability which can only be verified over time.

The themes should expose the potentials hidden in the contingent rules of chess – their power to create things of beauty, which in the case of chess compositions are dependent entities, as they are man-made. Beauty in chess composition is not constant but a dynamic concept. Taste will change over time, and like the stars in the skies, themes have their periods of flourishing and decline, depending on the amount of life or energy they possess, and how long it will take for each to burn its entire vitality before turning into a white dwarf.

This book seems to have taken these or similar criteria into consideration. Hopefully the number of counter-examples is negligible and can easily be adjusted in a future edition.

This comprehensive encyclopedia is special in our field of chess composition and will be enjoyed by chess players as well. It is a must in the library of all lovers of chess problems and studies.”

Examples from the book:

Paradoxical idea of changed functions of moves in no less than two variations. A mate threatened in a try appears in another phase, usually the solution, after the same black move that defeated the try. 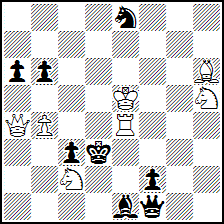 Like-moving black and white pieces stand next to each other in direction of their movement. At least three times when the former moves away along their common line the latter follows it by moving to the adjacent square. 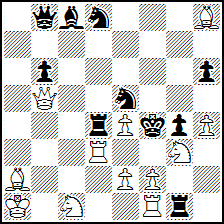 Mate image where all the pieces of the mating side take part, with the allowable exception of the King and the Pawns, and each square of the mated side King field is either blocked, or guarded only once. In other words: a pure economical mate. 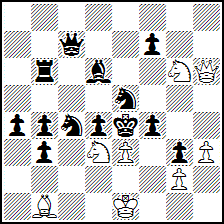 The white Queen delivers the maximum number (12) of mates. 1276 is the most economical example so far.

“The task is called the Queen’s Cross because the WQ and BK after the key move must be at opposite corners of a four-squares-by-two rectangle and this rectangle must lie wholly within the cross formed by b4-5, c4-5, d2-7, e2-7, f4-5 and g4-5” (Jeremy Morse).

Cross of the black Queen, giving check on every move, has also been achieved, but with only eleven different mates (see 1277). 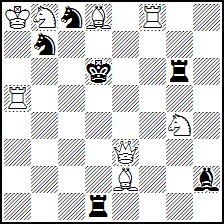 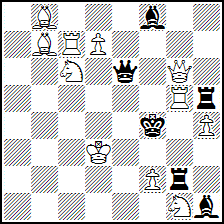