The event was organized by the Sachovy klub Svetla nad Sazavou in cooperation with the Czech Chess Federation and under the patronage of the ECU. Boys and girls played in the same tournament, but were ranked separately.

The Championship had 85 participants from 14 federations. All games were transmitted online. 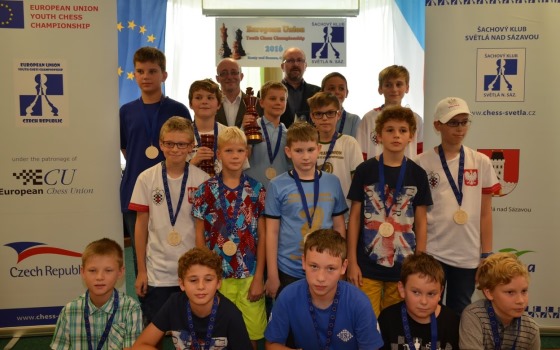 In category Boys U12 the champion is Barnabas Persanyi (HUN), second is Daniel Dardha (BEL) and third is Richard Turcan (SVK). EU Champion for Girls U12 is Alessia-Mihaela Ciolacu (ROU), second is Eniko Kiss (HUN) and third is Vitalia Khamenya (GER).

In category Boys U14 Radu-Cristian Fluerariu (ROU) won the gold medal, the second place is for Bogdan-Emanuel David (ROU) and third is Arthur Wachtel (GER). In category Girls U14 the Champion is Stella Sankova (SVK), second is Zuzana Gresova (CZE) and Daria Vanduyfhuys (BEL) finished on third.

Every participant of EUYCC received a medal and t-shirt with tournament logo. All eight EU Champions are leaving Kouty nad Desnou with a notebook! The next five players in each category also got valuable prizes.