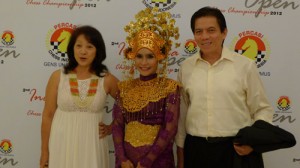 The name of Eugenio Torre is irrevocably lined with that of Asian and World chess.
Torre, who is now 60 years of age, is the first Asian to achieve the title of grandmaster. He is also the holder of the record for participating in the most number of World Chess Olympiads with his surprise qualification for his national team and subsequent excellent performance at the World Chess Olympiad 2012.
The Filipino legend who is still an active player and participating at the Indonesia Open Chess Championship (IOCC) 2012 is very positive indeed about the outlook for chess in Asia.
Eugenio Torre shares in an interview by Peter Long for Chessdom.com his views on the IOCC, hopes for chess in Asia and for his beloved Philippines.

Q: How are you finding Indonesia Open Chess Championship?
A: Very good – well organized and with all the conveniences. Many strong players are participating. Last year I also played in IOCC 2011 which was the first edition. Now I am here again and it is even better. All this because Indonesia has given very good support to chess and so I am confident that IOCC will continue to be held for a third, fourth time and thereafter.
Indonesia is a developing nation in Asia that values and honors chess. I also know that Indonesia sees chess as a way to combat illegal drug usage among students and in society.

Q: Given your vast experience in chess do you have any suggestions for us to improve IOCC?
A: I do have some suggestions for the organisers. For the next IOCC maybe you can make it a one day blitz tournament. Because many strong chess players that have come are from all corners of the globe and such an event will be good encouragement for locals to play blitz. Also blitz now is rated. The current prize fund is very good. It will not be a problem to reduce slightly and expand the prize fund further to perhaps 50. It is not the amount, but a chance for local players to win something. There has been a lot spent on organizing and the savings would be considerable so small amount prizes but they got the happiness of the game.

Q: There are increasing numbers of strong chess players from Asia especially from China and India. So what do think of the prospects for Asian chess today?
A: Very good. This is what I have fought for. When I started my career there were no GMs in Asia. In Europe and America yes, but not Asia. So I chased that target because I felt chess was a sport for all people. So I am very happy with the achievements by Asia. Now the World Champion is from Asia. This is a great thing. China is also getting stronger and stronger and that is also good for Asia. Chess came from Asia, so Asia should be good at it. 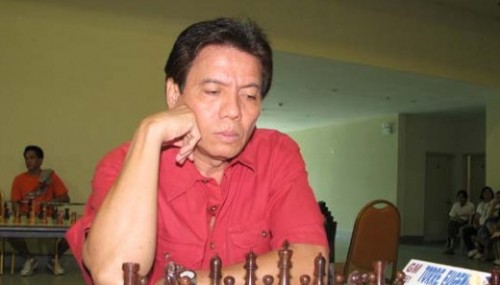 Q: What is the difference between chess today and when you first started your career?
A: Very different. Now we have computers and also chess has become very popular amongst children and so we have increasing numbers of young chess players playing in various age group tournaments.
In my time there was only the World Junior Championship and it was held every two years. This tournament was for those chess players under 20 years of age and only for boys. Chess is more and more popular, but I would prefer if chess adopted a variation such as Chess 960 or Fischer Random Chess. This is because with Chess 960 or Fischer Random Chess the openings depend on your own creativity, your fantasy and imagination, unlike today’s chess when often it is so dependent on the computer that such creativity has been reduced. In my opinion that is better.

Q: What are your dreams now for chess?
A: I have two dreams. I hope that FIDE will change the result for stalemate. So that stalemate is not a draw. For example, a win is 3 point, a draw 1,5 ponts, and stalemate 2 points where the player without a move gets only 1 point. For me with this major victory and minor defeat chess becomes more attractive and there will be less draws. I really would like this to happen. Maybe not even officially, but accepted as an option for organizers. Just like they can opt for Rapid or Blitz instead of Standard.

Q: What are your hopes for Philippine chess?
A: Chess is the Philippines is doing well. We now have 17 GMs, and also have a very talented young player in Wesley So. Soon I think that Indonesia will be doing the same to find players like Megaranto.
I hope these players will be better than me and I wish the same for Indonesia. Furthermore Indonesia has a great organization and for sure Utut Adianto being a part of it has made a difference. So far Indonesia has done very good development and promotion of the game I wish you will develop many young talents and in women chess your very young players in the World Olympiad has already achieved a fantastic result.

Q: Does chess still provide you with new experiences and insights when you participate in competitions?
A: Yes. The lesson is endless. I have studied and played a lot, but the most important thing is a still enjoy playing. I still am in good physical shape but no longer take the risks when playing that I used to. Chess is like life. When you are checkmated it seems the King is dead but in fact it is just trapped. It can’t move, it is trapped, but it is not dead.