The 60-year-old brand new grandfather will make a record 21st appearance in the World Chess Olympiad as GM Julio Catalino Sadorra begged off to continue his studies at the Texas Tech University where he is taking B.S. Applied Mathematics.

This year’s Olympiad is slated on August 27 to September 10 in Istanbul, Turkey.

“This is unexpected. I never envisioned myself representing the country in the biggest stage of chess competition as a senior citizen,” said Torre, who will break a tie with Hungarian GM Lajos Portisch for the most number of stints in the Olympiad. 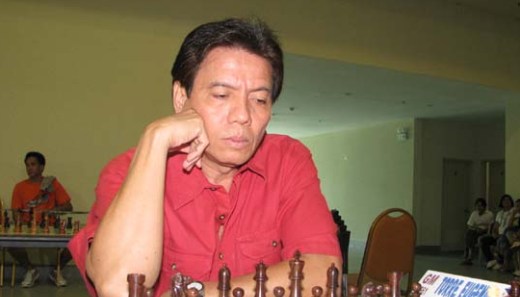 Portisch has played in 20 consecutive Olympiads while Torre has represented the country in 19 straight Olympiads and 20 overall – the first in Siegen, Germany in 1970 and the latest in Khanty-Mansiysk, Russia in 2010.

He credited his longevity and durability to a healthy lifestyle that includes regular workout in a popular gym.

“It’s not just about talent anymore. My recent success is a testament of the importance of living a healthy life.”

His amazing fitness is in full display during the tournament dubbed as the “Battle of the Grandmasters.”

Instead of fading in a 15-match marathon, Torre won his last four matches to share third place with International Master Oliver Dimakiling although he missed the last outright seat to the Olympiad via tiebreak.

Meanwhile, the National Chess Federation of the Philippines (NCFP) headed by chairman/president Prospero “Butch” Pichay exercised its option to pick the last player in the team on GM Oliver Barbosa.

The country’s top player, GM Wesley So, is seeded in the team and will man the top board followed by Barbosa, Torre, Paragua and Dimakiling.