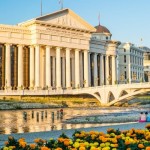 The event will start with European Blitz Chess Championship 2018, which will take place on 6th and 7th of December, and will be played according to the Swiss system, in 11 paired rounds, with the time control 3 minutes game + 2 seconds per move starting from the first move.

European Rapid Chess Championship 2018 will be played on 8th and 9th of December, according to the Swiss system, in 11 rounds with the time control 15 minutes game + 10 seconds per move starting from the first move.

Both events are open to all the players who represent Chess federations listed as ECU members, regardless of their title or rating.

Technical Organizer of the Championship is Chess Club Gambit Asseco See and Chess Federation of FYR of Macedonia, supported by European Chess Union.