On Sunday September 9th at the 38th FIDE Congress, FIDE Treasurer and Executive Director Nigel Freeman reviewed for the General Assembly the status of the lawsuits along with the financial implications.

Both lawsuits were tied to the 2010 FIDE Presidential election and were heard in the Court of Sport Arbitration (CAS) in Switzerland.

The first one, brought forth originally by Karpov 2010 and 5 national chess federations (France, Germany, Ukraine, Switzerland, and USA) was in regard to accusations that the Ilyumzhinov ticket was inappropriately formed, without the proper consent from the national federations of the ticket participants among other issues.

The second case, brought forth by the English and Georgian chess federations, was in regard to the FIDE President nominating more individuals for Vice President positions than he was authorized to do so.

FIDE won both suits, some points on actual merits and some points on technical merits. FIDE has stated that more than 1 million euros have been spent defending FIDE, while the opposing party was having free services from international law firm White & Case.

In the first case, FIDE was awarded a very low sum, which FIDE appealed to the Swiss Supreme Court. The Supreme Court referred the matter back to CAS to reconsider the monetary award. Per Mr. Freeman, during the appeal hearing, the 5 national chess federations informed CAS that FIDE was a rich organization and should and can seek to collect the money directly from national federations, requiring no new court ordered award. CAS took this at face value and said the same. 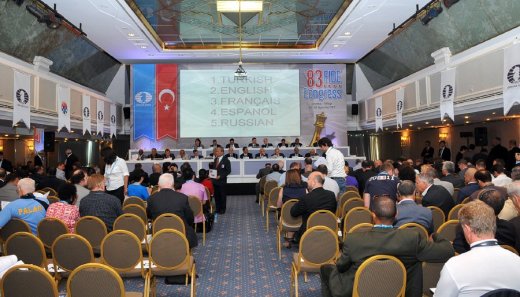 During the meeting, Mr. Freeman asked those 5 federations exactly how do they suggest that FIDE goes about to collect this money? For some time the 5 federations were silent until a representative of the French Federation spoke up and gave the suggestion that the 5 federations will go back to Karpov 2010 and Garry Kasparov to ask for some money.

For the next 30+ minutes a heated discussion erupted on the General Assembly floor discussing what should happen to these federations that sued and lost. Multiple proposals were floated, some as simple as an apology, with others as brutal as suspension. From the videos linked below, the official proposals came forth as:

What was decided was that between now and the next FIDE Congress in Ankara, Turkey in 2013, the 7 federations will approach Karpov, Inc and Garry Kasparov to see if they will pay anything to FIDE.

During the discussion of the legal matters, FIDE President Kirsan Ilyumzhinov spoke of the fallout of the lawsuits (please refer to the linked video at the top of this article at time 29:26 for Mr. Ilyumzhinov’s speech).

Rosneft, the sponsor for the Chess in the Schools (CIS) project, stated they were not to renew their sponsorship. Rosneft has generously donated 1 million US Dollars to the program over the last year, enabling many countries to create CIS programs. They have been a wonderful sponsor and partner with FIDE.

Mr. Ilyumzhinov had renewed the request from FIDE to Rosneft to sponsor another 1 million US Dollars for the CIS project but Rosneft cited newspaper articles that stated FIDE was a rich organization (per the CAS appeal and the statements of these 7 national federations) and thus did not require sponsorship from an outside party.

Mr. Ilyumzhinov stated he is continuing his efforts to work through this issue and have Rosneft renew their sponsorship.