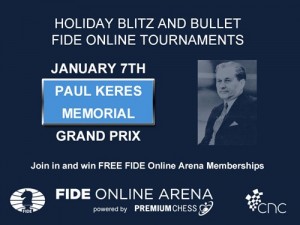 The last year has been an innovative and exciting one for Online Chess. 1.680.000 rated games have been played in FIDE Online Arena and 750 Arena titles have been awarded to the members.

In the 1st FIDE World Online Amateur Blitz Championship 2015, amateurs had the chance to compete online for a world title. The winner was Muhammad Johan from Indonesia.

The most mesmerizing competition of all was undoubtedly the ladies event, the 1st FIDE World Online Women Blitz Championship 2015. GM Harika Dronavalli from India won the thrilling and glamorous Final Tournament in Rome, which took place in front of an audience. Georgian GM Nana Dzagnidze came second and the former World Champion from Russia, GM Alexandra Kosteniuk, came third.

The last competition for 2015 was the Christmas 2015 Grand Prix, a 14 hours long contest consisting of 4 blitz and 4 bullet tournaments, won by CM Arystanbek Urazayev from Kazakhstan.

2016 has started dynamically with the New Year’s 2016 Grand Prix, where 271 players from 62 Federations participated. The winner was FM Dirk Paulsen from Germany.

All FIDE Online Arena members are invited to participated in the last Grand Prix of the holiday season, the Paul Keres Memorial 2016 Grand Prix, on the 7th January 2016. The first tournament starts at noon, GMT/UTC time.

Fide Online Arena plans more exhilarating events for 2016, along with many new features and improvements in its services: online coaching and lessons by FIDE Academies, more Fide rated Tournaments, new possibilities from the recently upgraded, user friendly and dynamic interface of the Online Chess platform, promising to engage all chess fans to a unique gaming experience, along with the New Era that has come along with rated Online games and Arena titles.

Arena titles are going to be included in monthly FIDE rating lists starting from January 2016. As official FIDE titles they can precede the players’ names in over the board competitions as well.

The RBB rating lists (including players’ ratings from online and over the board rapid, blitz and bullet games) will be published every month on FIDE website starting from January 2016.

Stay tuned and embrace all surprises that are yet to come in the year ahead!