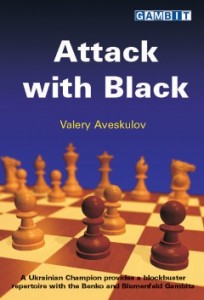 Grandmaster Valery Aveskulov has put together a sound but ultra-aggressive repertoire based on gambits that have proved their worth in grandmaster play over many years.

He examines all of White’s options and move-orders after 1 d4 Nf6, and shows an aggressive reply to each of them. He also explains typical plans in depth, so you will always know how to turn the screw once you have your opponent on the run.

Chessdom: Hello Valeriy. Your book “Attack with Black” has just been printed by the respected house Gambit Publications. Please tell us a bit more about the project.

Valery Aveskulov: First I’d like to say that it I feel a new sort of positive emotion to keep my own book in the hands. I want to express my gratitude to Gambit Publications Ltd who helped me not only with printing of the book, but also with the chess-related part of the work.

A personal thanks to Graham Burgess who found many interesting ideas, which definitely made my book more instructive. Honestly, I didn’t expect such a careful attitude from the publisher to every move in the book.

The book is completely dedicated to the opening repertoire for Black against 1. d4. Since I have played the Benko Gambit from 1993 (when I was 7 years old), this is the basic opening. But I also covered possible deviations from White and included the Blumenfeld gambit (if White tries to avoid Benko playing 2.Nf3), Vaganian Gambit (1.d4 Nf6 2.c4 c5 3. Nf3 cxd4 4. Nxd4 e5 5. Nb5 d5!, where I found an interesting line against White’s most dangerous setup seen in the game Aronian-Sutovsky, 2007), Trompowsky attack, London system etc.

I tried to write the book that could be interesting for amateurs and professionals alike. There are verbal explanations and basic ideas of that or another variation, but one can also find some interesting novelties that definitely deserve practical tests.

Since the main opening is Benko Gambit, in the end of the book I offer three specific chapters. One presents positions that Benko player should avoid with Black pieces; another contains “dream positions” (of course, all diagrams are explained); and, finally, I offer my readers to practice in tactical and strategic exercises in Benko positions. In such way, the readers can move from theory to practice.

Chessdom: Are there editions in other languages beside English?

Valery Aveskulov: So far it is only in English. But we are ready to collaborate with chess publishing companies to have the book in different languages.

Chessdom: Did you refer to the material from other books that cover the same subject?

Valery Aveskulov: Yes, of course, special attention was dedicated to the books written by Boris Avrukh, John Watson, Boris Alterman. You can also see a discussion with other authors.

Chessdom: And now the question that always pops up after the appearance of an repertoire book. Aren’t you afraid that your future opponents might take advantage of knowing exactly which lines you recommend?

Valery Aveskulov: This is a valid concern but I am not worried since I practically stopped playing in the tournaments and mostly focused on chess coaching and my PhD research. I didn’t have any reason to hide the novelties – everything I found is in my book!

Chessdom: Are you planning to continue with writing?

Valery Aveskulov: Yes, of course. Taking into account my coaching practice, I collect lots of interesting ideas and material for various chess topics. But now it’s time to do my PhD research on Annual Leaves. This work will end sometime in 2014. Until then it is hard to imagine that I will write something new, but later I promise, I will! 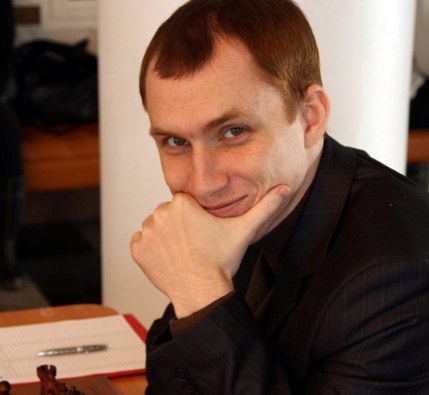