After the surprising victory obtained yesterday by Fabiano Caruana over number 1 in the world rankings, the Italian continued his winning streak on day two of the Chess Grand Slam Masters Final after beating Sergey Karjakin, thereby placing himself at the top of the provisional leaderboard in Sao Paulo.

Caruana’s lead has been favoured by a draw between Olympic champion Levon Aronian, the only one who could catch up to him, and World Champion Viswanathan Anand. 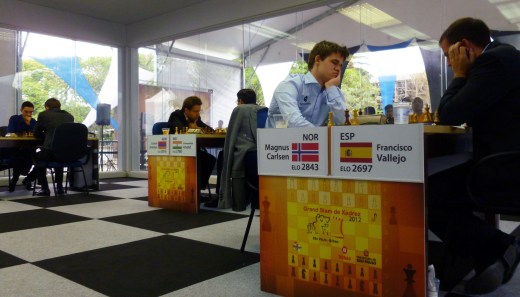 With these results, the most significant fact is the apparent sliding down the leaderboard of Anand relative to the other two big favourites of the tournament as he wasted his respected favourable initial positions on playing with white in the first two matches.

In a similar fashion Russia’s Karjakin is lagging behind in last place, once again falling a victim to great pre-game computer preparation on the part of his rival. After gaining an advantage with the sacrifice of a exchange (rook for a bishop), Caruana conducted his game with the utmost ease to obtain an indisputable victory.

With this second win, Caruana has risen from virtually sixth to fourth spot in the FIDE (World Chess Federation) rankings.

The match played between Olympic and World champions Aronian and Anand respectively, ended disappointingly for the around one thousand fans who were following the tournament at Sao Paulo’s Ibirapuera Park.

Both opponents practically copied matches they previously played, and after a brief contest that did not even reach an hour and a half in duration, they agreed to a watered-down draw and, just like that, they both left the Sao Paulo sporting premises.

In the third and final encounter, Norway’s Magnus Carlsen made up for the defeat inflicted on him last year by Spain’s Paco Vallejo. The initiative of the game fell quickly into the hands of the number 1, who forced the Spaniard to defend himself and fight for a draw.

This seemed like a reasonable option based on how the moves progressed. However, a fatal error on move 37 by Vallejo allowed the Norwegian to enter an endgame with a clear advantage that the Spaniard was unable to withstand the pressure.

The third round will be played on Wednesday, follow the games live with computer analysis.