The Korchnoi Zurich Chess Challenge 2017 has had its first decisive result: The American Hikaru Nakamura won the Opening Blitz and thus made it very clear that he intends to repeat his success from 2015 and 2016 and therefore become the first player to win the tournament three times in a row.

Although the American’s success could readily be expected, the course of the tournament indicated a small sensation at first – after the penultimate round, it was “Oldie” Boris Gelfand who was leading by half a point! But he failed to make the last step towards victory and fell victim to an unusual h4 by Ian Nepomniachtchi in the Najdorf Sicilian while Nakamura drew against Anand and therefore surpassed the Israeli with the better Sonneborn-Berger. 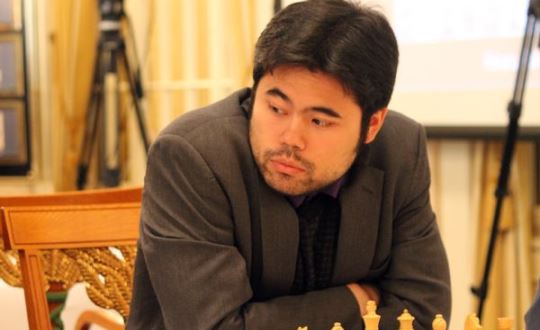 With this win, Nepomniachtchi moved up to equal forth place together with Indian Viswanathan Anand and behind of Vladimir Kramnik who scored a solid +1.

The two “underdogs” scored very well in this extremely strong field. The local hero Yannick Pelletier recovered well after a devastating start with 0 out of 3 and managed to beat both Peter Svidler and Ian Nepomniachtchi.

Grigoriy Oparin scored even better; after four round, he was trailing the leaders by half a point and only a blackout phase with two losses in a row cost him a place among the leaders.

The Opening Blitz has, however, no effect on the final rankings; it was held only to determine the pairings for the main tournament that will start tomorrow with

After the Opening, the tournament will now move on to the Kongresshaus, where the Grandmaster event will be hosted together with the Korchnoi Open. The 1st round will start tomorrow at 5:00 p.m. and will be broadcasted and commented live on our website.