Interview with Alexander Morozevich in Reggio Emilia – Part One

Dario: In the last Olympiad, Russia has been able to field three teams. You had initially been selected for the second team but you declined to take part, probably, and rightly so, because you really are a Russia 1 player. Will you try to reclaim your position back for the next Olympiads in Istanbul?

Morozevich Alexander: I didn’t refuse to play for Russia 2 in 2010, I simply didn’t think I could make a worthwhile contribution. As far as the 2012 Olympiads go, I know that I will have to obtain good results to be selected, so the only thing to do really is do my best game after game. 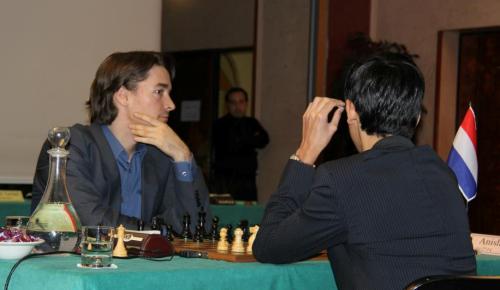 D: When will we be able to see you fight for the World Championship? Do you think the current format might lower your chances, as your style is more suited to match play?

M: I don’t think we can really talk about what my chances are with the current format for the very simple reason that the format has continuously changed in the last few years. What I can say is that I feel ready to play matches even if I haven’t played many before, and it is a fact that with a KO format my chances are extremely low as in many years I haven’t been able to win tournaments of this type or even simply to get satisfactory results. Therefore, in order to compete for the World Championship I would have to qualify in some other way, or the format must change.

D: After competing for so many years, what are your most memorable moments, and of those, which are the most pleasant to reminisce ?

M: I can’t really say what my favourite games or tournaments are, I couldn’t even list a top 10. Basically, every event I’ve played in my chess career has left me with many pleasant memories, and each one of these are precious to me. Of course, in time we tend to forget details and facts but I cannot divide them in positive or negative. Each memory is part of me, and I cherish each and every one fondly.

D: As a kid studying your first chess books, which champions were you fascinated by?

M: I don’t have a favourite player of the past, and the reason for that is that when I studied chess books as a kid, my goal was not to emulate players but to understand the game in depth, extracting from those books the best ideas and concepts.