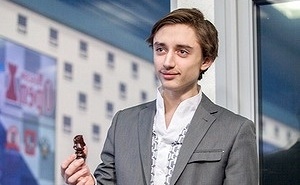 Daniil Dubov won over Vladimir Belous in the old masters’ style and approached the leader of the Alexander Pochinok Memorial Men’s Student Grandmaster Tournament. We addressed several questions to the Moscow grandmaster.

Q: Daniil, congrats on the bright victory! Tell us about the key moments.

A: Thank you. There was uncompromising struggle during the whole game: we both wanted to win, as I started the game poorly and Volodya’s start was even worse.

He surprised me a little bit in the opening, I know, there is such a line, I studied it long ago. It seems to me, Volodya Fedoseev was playing the same with the black in Taganrog recently. As Volodya is a star now, it’s better to follow all his games carefully.

The key moment happened when my opponent moved 15…Bg4, and I sacrificed my bishop on f7. It seemed to me, if I didn’t attack the f7, I wouldn’t receive any advantage. Usually I’m trying to logically evaluate such positions, that’s why I thought I must sacrifice, otherwise everything would be too much comforting for the black.

In the end of the game Volodya missed his chance and I was a little bit upset that I hadn’t sacrificed the queen 27.Qe6! with the mate (you can find a detailed report of this game in the Round 4 annotations by Alexander Kalinin).

Honestly, I think it wasn’t a top-quality game, but taking into account everything that happens in the tournament, it’s not so bad. I’m glad I managed to win.

Q: Are Volodya and you old opponents?

A: We have just a several years’ age difference, but we met only once in the junior tournaments. In 2009 at the U16 Championship of Russia. If I’m not mistaken he was 16, and I was 13, so we were playing with such small odds. He won that tournament, and I became the second. I think, in general we played less than 5 games against each other.

It turned out so that I stopped to play in junior tournaments quite early, that’s why I didn’t play much against other players of the same age. For example, we played only two games with Volodya Fedoseev despite of just a year age difference. And only one game with Ivan Bukavshin.

Q: So it means, you don’t know your opponents in this tournament good from the chess point of view?

A: Yes. I met them many times, but we didn’t share the board. It seems to me I met Ulvi Bajarani many times in different junior competitions, but here I played with him for the first time. Daniel Sadzikowski is the person I’ve never met before but the quality of his games place him to the second or third position. The result of our game was a logical draw.

Q: Tell us about your study in the RSSU, please.

A: It’s nice, the University is doing everything possible to support pro athletes, including chess players. By the way, several times I met famous football players in the RSSU. It’s interesting, one of my friends is playing for the FC Rostov, that is great. And once I met in the university his teammate and we found out, we have a mutual friend.

As for the study, I need to pass all the exams, but I have permission for free attendance. I survived just one exam session. I want to believe it was successful.

Q: Daniil, thank you for the comments and the talk. Good luck!