Chessdom: Kiril, congratulations for winning Karpos Open, one of the strongest open tournaments in Europe. Would you share your impressions?

Kiril Georgiev: Thank you! This was the fourth edition of Karpos Open and it gathered more than 250 players, including 55 elite Grandmasters. The prize fund was increased to 25,000 EUR, thanks to Karpos Municipality and its mayor Stefche Jakimovski.

I started with 3.5/5. Although I had an advantage in three of my “White” games, they all ended in a draw. In the key fourth round I played against my compatriot IM Sasho Nikolov, he caught me unprepared in the variation we’ve played and I got into a difficult position in 30 moves. Luckily, the mutual time trouble helped me and I managed to win.
My play in the next fifth round against IM Batuhan Dastan was excellent and I expected to win after 40 moves, but my opponent found a fantastic pawn sacrifice, exchanging queens and entering a theoretically drawn rook endgame. 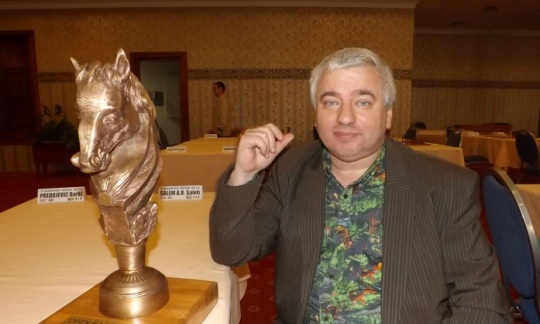 Chessdom: You finished with the remarkable 4 out of 4! What is the recipe?

Kiril Georgiev: After this “slow start” I had few points (only 3.5/5) and even less tie-breaks. That’s why I decided to play step by step, trying to take the maximum of every game.

The marvelous victory, sacrificing a bishop and a rook against GM Mircea Parligras in the seventh round was very important for me!

The next game was extremely tense, I was on the edge of the precipice, but my opponent got into a time trouble and missed his advantage, playing 25.exd5. Later on, he missed to draw the game, as well.

The Spanish GM Ivan Salgado was leading with 6.5/7 and he seemed to be sure in his tournament victory, but a loss against GM Andrey Vovk in the eighth round changed the situation. Suddenly, the battle for the first place sharpened. Vovk got first with 7/8 before the last round, while I was sharing second place in a 4-way tie with Salgado, GM Robert Markus and GM Anton Guijarro.

I decided to play the final game till the very end and after many adventures, I managed to win. Guijarro lost against GM Eduardo Iturrizaga, thus only I and Salgado had chances for the first place. Fortunately for me, Salgado drew a winning endgame, otherwise he would be first.

Thus, after lots of fight and luck on my side, I managed to win Karpos Open with 7.5/9.

Chessdom: Many players, having black pieces, try to “dry” the game and finish equal, but it seems like you play for win in every game. How do you get into the fighting mood? Is there something special?

Kiril Georgiev: I always play for a win, I’m used to fight and even in this tournament four of my victories were with black pieces.

Chessdom: It is your second win of Karpos Open. Which title is more valuable for you and which victory you find the most remarkable in your chess career?

Kiril Georgiev: Yes, I was victorious in Karpos Open 2012. I had 6.5/7 and after drawing in the last two rounds remained first. This edition of the tournament was much stronger, but I appreciate both of my victories.

I’ve been first in many open tournaments, Grandmaster round-robins and team championships, but my best achievement is being a part of World’s Top-100 Players List for 30 years. In 1993 I was even in World’s Top-10 for Men. My career of an active player is still going on and I hope that many successful tournaments are still ahead.

Chessdom: You are an active player, taking part in many chess events, but how often do you usually train when you are at home? Can you describe one training day?

Kiril Georgiev: I train regularly, almost on a daily basis, following the strongest chess tournaments. I don’t have any constant program, sometimes I work 3-4 hours, but sometimes I miss a whole day.

Chessdom: We are familiar with your brilliant endgame technique. How would you determine your style of play, as a positional, or as a tactical one?

Kiril Georgiev: I think I have a universal chess style, playing good in every stage of the game – opening, middlegame and endgame. I realize my weaknesses and I try to cope with them. One of the best ways is playing blitz on the internet, training different aspects of my game.

Kiril Georgiev: I prefer classical chess, although lately I have had great success in blitz and rapid tournaments. I think that the time control must be restricted to 4 hours per game. Nowadays, every club player with ELO rating higher than 2000 knows their variations until move 15th-20th and I find unnecessary to spend more than 4 hours on a game.

Chessdom: Thank you for the interview and good luck in your next tournaments!