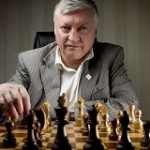 The 19th Karpov International Chess Tournament is taking place in the small Siberian town of Poikovsky, Russia from 27 May to 5 June. The venue is the Sports School “Neptune” in Poikovsky, Nefteyugansk Ugra, Russia. The event is a 10-player single round-robin with the average Elo 2688. The time control is 100 minutes for 40 moves, followed by 50 minutes for 20 moves, then 15 minutes until the end of the game, with a 30-second increment from move 1.
Replay the games from Karpov Poikovsky Tournament 2017 here