Both classical games in the Anatoly Karpov – Yasser Seirawan match were drawn, but not without two long fights.

The match between legends is underway at the Chess Club and Scholastic Center of Saint Louis from June 10-13.

In addition to the two classical games already played, two rapid games (June 12) and 10 blitz games (June 13) will determine the winner of the “Clash Between Kings.”

Karpov’s defensive skills have been stellar in both games. After achieving a strong position on the White side of the Slav in game one, he erred and Seirawan won his weak c-pawn. However, Karpov’s two bishops vs. a knight and a bishop advantage allowed him to keep the balance, and the game was drawn after almost 70 moves. In the post-game analysis, both players indicated that the draw was not as difficult to achieve as commentators and fans believed. 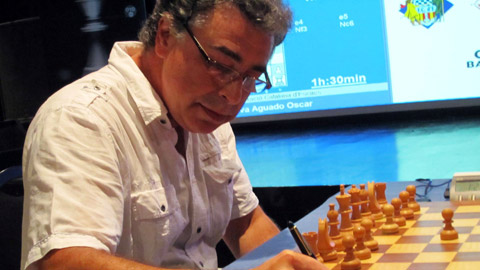 In the second game Seirawan was on the white side of a Queen’s Indian defense. Karpov deviated from main line theory early on with 5…d5 (instead of …Bb7 or …c5) and ended up with a passive and unpleasant position. Seirawan was pressing all game. After the game, both players agreed that trading rooks with 34.Re1 gave away most winning chances and that 34. g4 was better.

Commentator GM Ben Finegold noted that Seirawan’s handling of the clock in this tournament has been excellent so far. By contrast, in the recent U.S. Championship, Seirawan got into deep time trouble in several games.

After the second classical game, Seirawan pointed out that the transition from classical to rapid and then blitz may be challenging for both players and will likely result in fireworks.

The match resumes on June 12 at 1 p.m. Central, 2 p.m. Eastern with two rapid games. Catch live commentary and analysis of the games at www.livestream.com/uschess.

Article by By WGM Jennifer Shahade