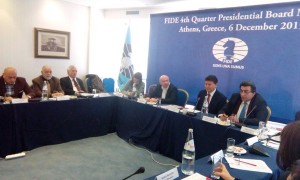 The 4th quarter Presidential Board meeting is being held in Athens, Greece, today 6th of December 2015. Among the topics like the World Championship cycle and the Women’s World Championship are also the restrictive measures against FIDE President Kirsan Ilyumzhinov introduced by the U.S. Department of Treasury.

After a full report by the President, Kirsan Ilyumzhinov suggested to suspend his powers as FIDE President until the next Presidential Board. The news came via the Twitter of B. Balgabaev, assistant of the FIDE President.

According to article A.9.5 now the functions of Kirsan Ilyumzhinov will be performed by the Deputy President Mr. Makropoulos

Following the announcement by the US Department of the Treasury that the US levied sanctions against Kirsan Ilyumzhinov, Russian citizen and FIDE President, Mr. Ilyumzhinov has informed the Presidential Board that he will withdraw from any legal, financial and business operations of FIDE until such time as Mr. Ilyumzhinov is removed from the Office of Foreign Assets Control sanction list.

Mr. Ilyumzhinov advised that he has initiated legal procedures in the US aiming to request additional information and reverse restrictive measures put by the US Department of the Treasury. During the next Presidential Board meeting, Mr. Ilyumzhinov will update the Board as to the progress of the legal procedures.

Mr. Ilyumzhinov’s decision to withdraw from any legal, financial and business operations of FIDE is to enable him to concentrate on clearing the situation with the US Department of the Treasury.

The Presidential board in Athens continues, stay tuned for updates

The story in Russian here 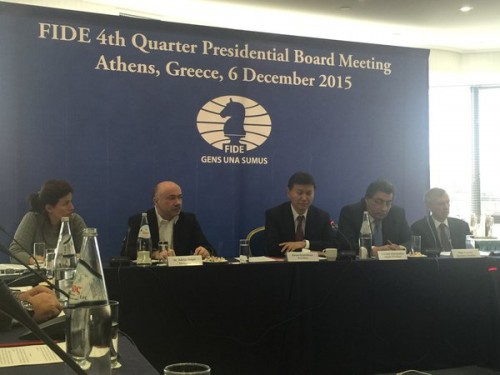 Today’s Presidential board meeting (photo by B. Balgabaev)

Kirsan Ilyumzhinov has been at the front seat of FIDE for two decades. He recently celebrated his 20th anniversary as FIDE President and shared in an interview, “FIDE means everything to me. It means an indescribable love for chess. It means pride for everything that I have accomplished… I love what I do, and I don’t care how it affects my health or how much of my own money I have to spend on it. I’ve got no intention of taking a Rolls-Royce or Rolex to the grave with me. I want to leave a legacy behind.” Read the full interview with Kirsan Ilymzhinov here 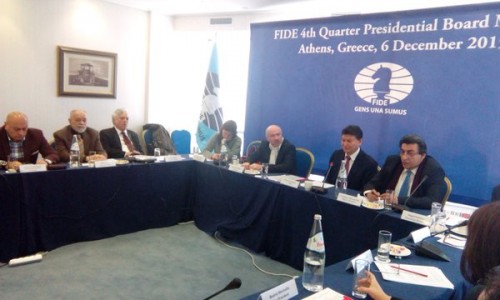 FIDE Presidential board meeting (photo by A. Karlovich)