The traditional Marostica Chess Festival took place on 12-14th September 2014 at Piazza Castello in Marostica, a town in the province of Vicenza, Veneto, northern Italy, mostly famous for its living chess event and for the local cherry variety.

A chess game with living characters represented a Middle Aged story (see below).

The story of the Game dates back to 1454 when the town of Marostica was a part of Venetian Republic. Two noblemen, Rinaldo d’Angarano and Vieri da Vallonara fell in love with Lionara, the beautiful daughter of Taddeo Parisio, the governor of Marostica. Parisio was a great Humanist and forbade them to compete in a bloody duel for Lionara, which was a very common challenge then. Instead he suggested a game of chess, in which both contenders were masters, to decide who will marry belle Lionara. According to the legend, the loser took Patrisio’s sister as a consolation.

More than 600 people with period costumes evoked the legend of Lionora from 12th to 14th September 2014, offering a spectacular representation, enriched with stage effects and fireworks, knights and dancers, jugglers and fire eaters, musicians, comedians, swordsmen.

The living chess game festival has been offered for over 50 years. Nowadays, it is among the most popular shows, evoking legendary events not only in Italy, but all over the world. 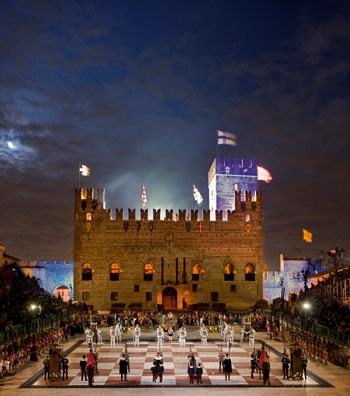