This unique event is the first ever chess match between husband and wife, who also happen to be the winners (overall and women’s category respectively) of the previous edition of Negroponte Open in 2010.

Hosting this match in Chalkida is a vivid example of the true spirit of Greek hospitality, as well as the increasingly strong bonds of friendship between the Greek and Turkish people. This aim is furthered by the fact that Suat Atalik was, in 1994, the first ever Turkish sportsman to play in the Greek League for a local team in any sport. 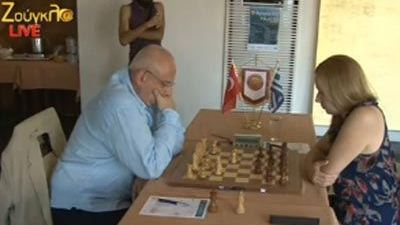 Suat Atalik won both games with the classical time control 90’+30”. There followed rapid games with 15’+10” where Suat Atalik achieved another victory 3,5-0,5.

The match is organised by the Chalkida Chess Academy and Giorgios Tsounis, the arbiter was IA Anestis Mihailidis, the games were not rated. Full scores can be found on www.negroponte.net.