The clash between the top two seeds and overnight joint leaders GM Aleksej Aleksandrov of Belarus and GM Andrei Deviatkin of Russia was an intense struggle with both fighting all out, but in the end they had to settle for a peaceful result in the 8th round of the Mumbai Mayor’s Cup International Chess tournament in progress at the Chetana College.

On the second board Nikolai Chadaev of Russia was also stretched all the way by local lad Saumil Padhya but the latter was outplayed in the ending.

In another important result John Paul Gomez of Philippines defeated slightly higher rated Kirill Stupak of Belarus. After the draw between the leaders on the top board, they are now joined in the lead by Gomez and Chadaev, all having scored 7 points apiece.

An unwell Abhijit Kunte took shelter in a short draw against GM Hoang Thanh Trang and these two are half a point behind the leaders along with B Adhiban who scored a victory over WGM Ticia Gara. 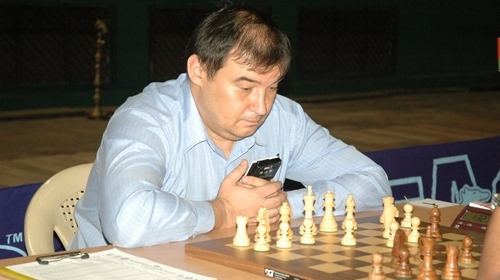 In fact there are now 7 players with 6.5 points each among them talented teenagers Sahaj Grover (playing despite a severe reaction to antibiotics) who defeated Sagar Shah and his Delhi mate Vaibhav Suri.

The Slav defence game on the top board lasted for 50 moves where the players signed truce only when they were left with a rook and one pawn each and it was completely dead.

In the Spanish game Saumil Padhye played enterprisingly with the White pieces against Chadaev and did not miss any opportunity to exchange pieces. In the ending, the Russian showed better technique to first win a pawn and then the game after 76 moves.

Stupak lost after 48 moves of a Queen’s Gambit to Gomez.