After fighting it out in the first eight rounds, the top rated players settled for short draws amongst themselves in the 9th round of the Mumbai Mayor’s Cup-International Chess tournament conducted by Venus Chess Academy and co sponsored by LIC of India.

Only two more rounds remain of this 335 player Swiss League event which is in progress at the Chetana College.

Interestingly the two top boards featured all the four overnight sole leaders on seven points and within no time and just a few moves Nikolai Chadaev had signed truce with Aleksej Aleksandrov, the top rated player in the 11 round Swiss League event. 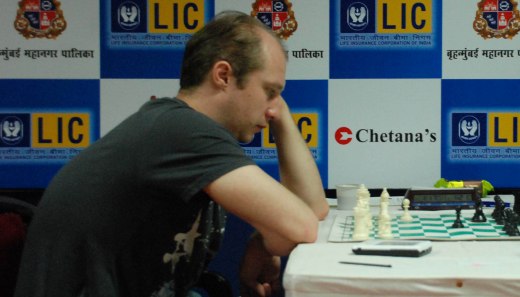 This means by inching half a point forward, the top board leader position more or less remained same but B Adhiban, the highest rated Indian player in fray defeated Hungarian GM Hoang Thanh Trang in a long game to join the overnight four joint leaders, Alexandrov, Chadaev, Gomez and Deviatkin at the top of the points tally, each totaling 7.5 points.

There are 11 players with 7 points each and include the likes of Kunte, Grover, Chakravarthy, Aditya Udeshi, Attila Czebe, Mark Paragua, Kirill, Nimmy A, M Karthik , Rahman and Lanka Ravi.

Vishnu Prasanna also had a chance to catch up with leaders but ended on the losing side against Kirill Stupak.

Talented teenager Sahaj Grover also appeared to have winning chances against Bangladeshi GM Ziaur Rahman and joining the leader gang but in a double edged, complicated game, which went through interesting twists and turns, the youngster probably missed the winning way. However after much drama, this clash fizzled into a draw.

Adhiban adopted the French defence game where the queens were exchanged rather early. Thereafter it was slow maneuvering and exchange of pieces the the players and they reached a rook and pawn ending. Around the 44th turn, the players had a rook and three pawns each and the game appeared to be heading for a draw. Adhiban continued and kept on pressing. Hoang then did not play accurately and lost after 74 moves.