Pakistan women team may not be among top 100 rated chess playing nations. But they made their mark on the annuals of Chess Olympiad when mother daughter pair of Ghazala Shabbir and Fatima Shabbir made their debut here at Expo Centre in Turkey.

This may be first instance of its kind when mother/daughter pair made debut in the same Olympiad. 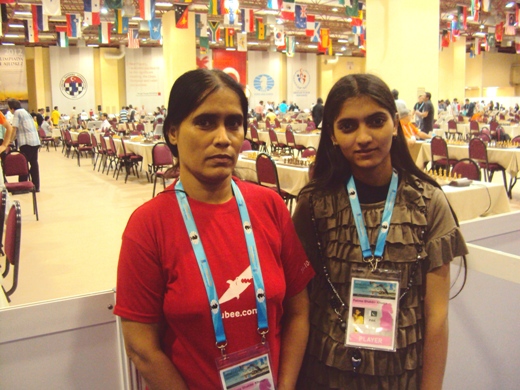 “It’s a great honor for us to represent Pakistan in such a big event,” Ghazala Shabbir, who works in Pakistan Railways at national level, commented. “Though we are not doing very well in the Olympiad but I feel proud that we made a different kind of history in this Olympiad. It is altogether a different environment here and we feel lucky to be part of Istanbul Chess Olympiad.”

“It was like a dream come true and it was more delightful that my daughter played besides me,” beaming Ghazala said.

“Chess had always been in the family and I started teaching my daughter the intricacies of the game when she was just 5-6 year old. I am happy that she had picked up the game so fast and now earned the right to represent country in Istanbul Chess Olympiad,” she added.

“Its wonderful to be in Istanbul and play and see some of great names in the world of chess both men and women,” Fatima, 10th standard student said.

Chess pundits, journalists and organizers may be researching whether this happened before or this is the first time when mother/daughter are making their first appearance at the same Olympiad.