Live blog of day 1 of WYCC 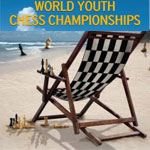 Welcome to day 1 live coverage of the World youth chess championship on Chessdom.com! In today’s blog we will be updating the events from Kemer every 15 minutes. We will make presentations of some of the key players of the event (not all, but as many as possible), present you photo material from the scene, and discuss the live games when they start.

The latest update will apprear right below the participants lists and the information will be arranged in reverse chronological order (refresh the page to get the latest updates).

Note: Chessdom.com will show you today a game from the WYCC live at the Live games arena.

Tigran Petrosyan and Vladimir Belous expectedly win their games, after achieving solid advantage. Update: after the time control IM Nyzhnyk has decisive advantage. We will make a pause and will return with the live blog after 20:00 CET.

IM Illya Nyzhnyk is encountering fierce resistance and precise play from Szalay Karoly, Nyzhnyk is with a slight advantage, but is difficult to find a clear plan to victory. Follow the game here.

Very nice preparation by Kristian Seegert and he is in an equal position against IM Nils Grandelius. The moves so far:

Vaibhay Suri closed his game in 16 moves, proving he has come for a medal at the WYCC.

CM Acosta, top seeded in boys U8 section, closes his game with victory after 32 moves against Erdem Karahan.

Tigran Petrosyan found the strong 21. f4 against FM Arribas in the U16 section, which will give him interesting advantage.

Here are the moves of the game so far.

In the girls sections WFM Effroimski has a material advantage, while WIM Paikidze is trying to get the initiative with white. Top seeded Anastasia Savina has achieved a nice position against Zoi Iordanidou and is looking for ways to materialize it. Motycakova and WGM Vojinovic are still in theory.

Anton Smirnov wins the first game with moves on the top boards, against Kaan Kesgin, mate in 31 moves.

First decisive results of the day are fact, due to non presence or zero default time. FM Acosta is forfeited against Belkhouja Zied, IM David Recuero wins against Matias Dimuro. Same is the story in the game WFM Styazhkina – Denon Nicole 1-0.

And the games started! After a slight delay the moves are rolling in Kemer, on close to 700 boards!

Chessdom.com will show you today a game from the WYCC live at the Live games arena. It will be from the U16 section and will be commented by NM Pete Karagianis aka “Coach K”. He is experienced Chess Instructor in both the camp, club lecture, classroom, or one-on-one setting. His scholastic students have competed successfully in national and local tournaments and they consistently rank in the top 50 or higher nationally for their age group.

Enter the arena now for live chat and analysis by computer engine.

The most recent youth event played was the European youth chess championship in Fermo. Some U18 players also participated in the World Junior Championship. The WYCC in Turkey will surely culminate a good year for young chess players, with more medals and norms.

One hour is left to the games, meanwhile the Tal Memorial round 7 has started, you can follow all games with commentary at the Chessdom live arena.

For those interested in the weather forecast for the next days: currently the temperature is 21°C with a probability for rain. In the next days temperatures will stay about the same, but the clouds will go away and the participants can enjoy sunny weather.

Kemer is a seaside resort and district of Antalya Province on the Mediterranean coast of Turkey, 40 km (25 mi) west of the city of Antalya. Although the weather is not good for the beach, it still is pleasant for walks at the sea coast with the skirts of the western Taurus mountains.

Pairings are now available, here are the top boards in each section:

Full pairings are at the official site.

The World Youth Chess Championship is Swiss system with 11 rounds. The rate of play will be 90 minutes for the first 40 moves followed by 30 minutes for the rest of the game with an addition of 30 seconds per move starting from move one.

Note: Any player who arrives at the chessboard after the start of the session shall lose the game. Thus the default time is 0 minutes.

Live games start at 14:00 CET, that is less than two hours from now. The full pairings are not yet available, the moment we have confirmed information, we will publish. Until then, for any questions or comments, feel free to contact us.

It is interesting to note that some of the players could also do well in higher groups, had they opted to participate there. For example IM Nils Grandelius (2540 SWE), IM Illya Nyzhnyk (2494 UKR), and GM Dariusz Swiercz (2493 POL) from the U16 group, as well as IM Kiprian Berbatov (2463 BUL) and IM Jorge Cori (2462 PER) could all participate successfullyin the U18 competition.

Similar is the situation with the girls groups, as WIM Deysi Cori (2374 PER) and WIM Padmini Rout (2333 IND) from the U16 section have high enough rating to try achieving a medal in the U18 section.

At youth competitions rating order is probably one of the most unreliable methods of predicting future medalists. However, just for statistics, here are some interesting facts of the U18 sections. Top seeded at the competition is the Russian IM Maxim Matlakov with ELO 2575. In his carreer he has wins against GM Grachev and GM Landa, while his current rating makes him the highest rated U18 RUssian (3rd in the world) His main competition in the U18 group comes from GM Ivan Salgado Lopez (2562 ESP), IM Nijat Abasov (2522 AZE), GM Ioan-Cristian Chirila (2510 ROU), Nabaty Tamir 2508 ISR, and GM Sebastian Bogner (2504 GER)

India will be the delegation defending the most medals from last year’s event. The players from India conquered a total of 12 gold, 3 silver, and 4 bronze medals (8 individual and 11 team medals). This year they come with the respecting number of 93 players, coaches and accompanying persons.

However, India’s task will not be an easy one, as this year the competition is stronger and several delegations are higher seeded for medals chances.

The World Youth Chess Championship has collected close to 1500 participants this year. The latest count states that players come from 88 countries all over the world and with the accompanying personnel, parents, coaches, staff etc. this number reaches 2380 people.

These numbers are significant improvement over the 883 players in Vietnam WYCC, but also lower than the 2007 event. The reasons for the last can be the financial crisis, the ongoing A (H1N1), or the weak promotion by the organizers, but in any case the number of participants is good enough for an exciting event in 2009.