Working visit in September in Paris

The candidate for President of the European Chess Union, Mr. Silvio Danailov will have a
meeting with the Director-General of the United Nations Educational, Scientific and Cultural
Organization, Mrs. Irina Bokova in Paris on 14th of September 2010. During the meeting
they are expected to discuss various options to enhance the cooperation between UNESCO
and ECU.

The main objective of UNESCO is to drive the expansion of cooperation among the
nations in the field of education, science and culture. This will be one of the goals as
well for Mr. Silvio Danailov should he be elected President of the European Chess Union.
During the meeting in Paris is expected that Mrs. Irina Bokova will land official support to
the nomination of Mr. Silvio Danailov for President of the European Chess Union.

“Besides being an incredible popular sport, the game of chess is also part of the cultural
heritage of the European nations. It teaches people to respect each other and to accept their
individuality and divers backgrounds.” – said Mr. Silvio Danailov.

“In addition, especially in countries like Bulgaria, the game of chess can be an important
element of the education and upbringing of young people. That is why ”Kaissa Chess
Management” makes continuous efforts to promote and popularize the game of chess in
schools across Bulgaria. Part of this effort is holding an annual tournament “Kaissa Chess
Junior” for children aged to 14 years. This year it was attended by over of 400 children from
across the country.” 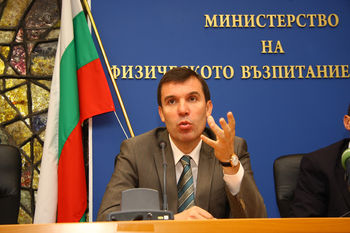