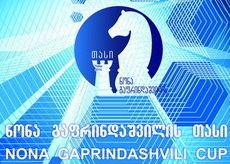 The International Open Chess Tournament Nona Gaprindashvili Cup is scheduled to take place from 8-17th September at the Chess Palace in Tbilisi, Georgia.

The tournament is organized by the Ministry of Sport and Youth of Georgia and Georgian chess federation.

The playing format is 9-round Swiss and FIDE rules are applied.

The time control is 40 moves in 90 minutes, then 30 minutes for the rest of the game. An increment of 30 seconds per move, starting from 1 move will be added after each move.