Arjuna awardee Grandmaster Abhijeet Gupta moved closer to clinching the title with a quick draw with Grandmaster Alexander Evdokimov of Russia in the 9th and penultimate round of 12th Parsvnath Delhi International Grandmasters Chess Tournament now coming to a close here.

On what turned out to be a very easy outing as black, Gupta blitzed his moves in quick time in the Grunfeld defense and Evdokimov, who arrived about ten minutes late for the game, decided to play it safe too with his white pieces. The pieces changed hands in a heap in the opening and the draw was signed in a mere 14 moves when the players were about to reach a level rooks and pawns endgame.

The draw took Gupta to 7,5 points out of a possible nine and he still enjoys a half point lead over nearest rivals. For the records, Ukrainian duo of Eldar Gasanov and Valeriy Neverov and John Paul Gomez of Philippines share the second spot on seven points each. 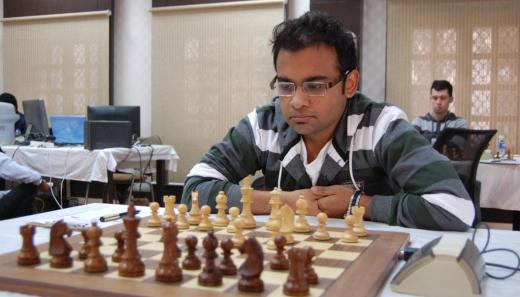 As many as four players – Grandmasters Deepan Chakkravarthy, Levan Pantsulaia of Georgia, International Master and Asian Junior champion N Srinath and Evdokimov share the fifth spot on 6,5 points each.

It turned out to be a hard fought affair at the top boards as Gomez ended the party of M R Lalith Babu in a bizarre game where the latter simply missed the thread of the position after enjoying better prospects in the opening.

Neverov got the better of unheralded Bobir Sattarov of Uzbekistan in a one sided affair while Gasanov proved superior to Ankit Rajapara who played with white pieces.

A little lower, Deepan Chakkravarthy played a fine game to beat International Master V Saravanan. It was a picturesque battle when Chakkravarthy sacrificed a full piece only for some positional compensation and slowly outplayed Saravanan in the ensuing endgame.

In other important games of the day, Srinath did his bit by defeating Marat Dzhumaev of Uzbekistan while Pantsulaia put it across former Commonwealth Champion R R Laxman to move within striking distance.