World Vice-Champion, RSSU graduator Sergey Karjakin took part in the Award Ceremony of the winners and medalists of the Scool Champions’ and Student tournaments, held within the frames of the XIII International RSSU Chess Cup, 2017 Moscow Open.

Sergey Karyakin expressed gratitude to the RSSU and to Natalya Borisovna in person for the organization of the festival and the support provided to the game of chess in general. He also confirmed his readiness to support the RSSU Cup, Moscow Open in future. “I’m glad such a festival exists, I support it in every possible way and I’m always ready to come here and talk to you. Play chess – it’s great!” – Sergey wished to the audience. 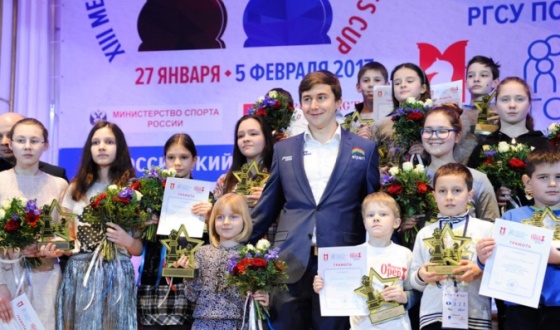 Natalya Pochinok congratulated all the participants and parents on the end of the tournament. She marked that the Moscow Open festival unites the best and most talented chess players of all the age groups. “The Moscow Open is the tradition, we will continue to develop in future. In a week period the RSSU will host a key children’s tournament – the Belaya Ladya (The White Rook). Of course I would like to mention the succession of generations, because now a great chess player Sergey Karyakin is standing next to me, and while playing in the major world competitions he makes famous the Russian chess school as well as the Russian State Social University, which he graduated from,” – Natalya Borisovna concluded.

After the end of the award ceremony Sergey was surrounded by a big crowd wishing to receive an autograph and make a photo. No doubt the kids will remember the meeting with a famous grandmaster for the rest of their lives.