Azeri star Shakhriyar Mamedyarov repeated the last year’s success and took another trophy at the Vugar Gashimov Memorial in Shamkir.

The ten-player round robin event was held from 20-30th April in Shamkir, Azerbaijan. In the final round Vladimir Kramnik defeated Pavel Eljanov, while the remaining games were drawn. 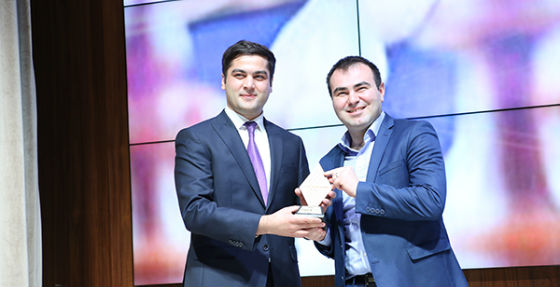 “The tournament was brilliant! Once again a high organizational level was demonstrated. Vugar Gashimov’s memorial is really an elite tournament in all aspects: a high prize fund, the organizers are keen on their work, a beautiful tournament hall, the Memorial is well covered in the press. I would also remind that FIDE President Kirsan Ilyumzhinov attended the opening ceremony.

This level is difficult to maintain, but we have to do our best. Everyone agreed that the fifth anniversary tournament will take place, and in the years to come Vugar Gashimov’s Memorial will also be held.

It is very difficult to raise the elo-category of the tournament, but on the jubilee it will be necessary to try to make sure that the world champion Magnus Carlsen takes part. I hope that he will find the time in his busy schedule.

At the moment, we have the “2:2 score” – Magnus Carlsen won the first two tournaments, and Shahriyar Mamedyarov the next two. In general, this tournament had many fighting games, which pleases me. I really hope that the next tournament will be just as wonderful.”