Top seeds Russia emerged clear winners after the ninth and final round of the TATA 14th IBCA Chess Olympiad for the Blind 2012 at Hotel Le Royal Meridien, Chennai.

Top seeds Russia came up with a powerful performance scoring a 3-1 victory over United Kingdom. Victories in boards two, three and four clinched the issue in favor of Russia. 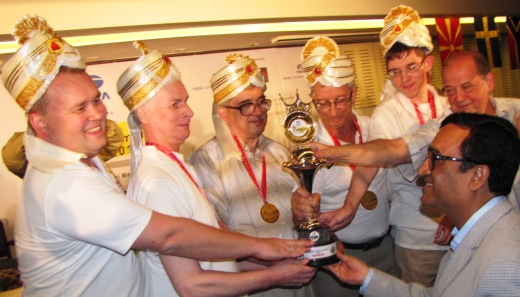 India “A” went down 1.5 – 2.5 to Germany in a close match, losing their medal chances. But the silver lining was the performance of Kishan Gangolli who took the individual Gold medal in the third board. Undefeated Kishan came up with an impressive show, scoring 7.5 points from 9 rounds. With six wins and three draws, Kishan stood like a rock in the middle boards, and dictated India “A” team’s fortunes.

Support from Swapanil Shah, Darpan Inani and Makwana Ashvin helped India “A” to the fifth spot. In the history of Chess Olympiad for the blind, the fifth spot here is India’s best. India “B” finished the last outing holding Turkey to a 2-2 draw, sharing the 18th place.