Gata Kamsky defeated his compatriot Hikaru Nakamura to score third consecutive victory and move into sole lead after round 8 of the Thessaloniki Grand Prix.

Five games started with Ruy Lopez and only Nakamura defended with French.

Leinier Dominguez remains in contention for the first place after beating Alexander Morozevich in a fine positional style. He is now sharing the second place with Fabiano Caruana who held an inferior game against Alexander Grischuk.

Etienne Bacrot got his first tournament win in the match with Veselin Topalov. Peter Svidler and Rustam Kasimdzhanov were also successful to complete the fantastic round with five decisive games. 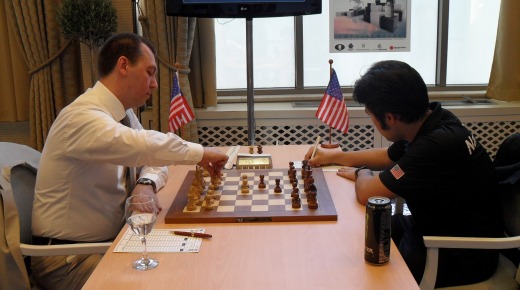 The game followed an earlier clash between Dominguez and Svidler, until Ivanchuk deviated by exchanging the Bishop on e7 and not the Knight on f6. Svidler joked that “…despite getting slaughtered in this line, I just keep playing it on and on. Probably I am too lazy to learn something else.”

Referring to the position around 17.b4, Svidler revealed that he has pages and pages of analysis on this position. He did review some of them before the round.

With 17…Rfe8 black is ready for c5-c4 and it is not clear what white can do. Ivanchuk thought for awhile and went for 18.f5.

White played all in with 21.e5, giving an exchange but hoping to compensate with an attack on the black King. Svidler believes that preparatory 21.Re1 was better option (21.Qf3 not that good because of 21…Nd7 and next f6).

The Russian also expected 24.Qf3 where he would reply with 24…Qd5. After 25.Rxf1 he calculated all the long lines and saw that he will not get mated. With 28…Qg4 black started the final phase in the fight for a win.

35.Qf3 might have been more resilient but it was already difficult to save the game.

In the all-American derby Kamsky chose the quiet Tarrasch system and sidelined the complicated positions that would arise in the main lines of 3…Be7.

Kamsky was surprised by 8…f6, but he quickly decided that the best plan was to take the Knight on h6 in order to prevent Nf7. The American champion suggested that 10…dxe5 might have been better, with probably only small advantage for white.

Just as black was ready to castle short and reposition the pair of Bishops, white got the action going with 12.b4. It was also too late for long castle because 14…0-0-0 15.Rb1, and there is no time for sacrifice on f3 as b4-b5 is coming in fast.

Kamsky said that Nakamura probably blundered 16.Bg6+, after which white is winning. He finally converted the advantage on move 50.

Remembering back to the first round when Grand Prix sponsor Ivan Savvidis made a ceremonial move for Kamsky, the American said – “It was nice, he told me something like ‘now you cannot lose’ and I felt obliged to try hard in the tournament”.

Etienne Bacrot attempted to play the ultra solid Berlin defence in Ruy Lopez, but white responded with the topical 4.d3.

On the next move white traded the Bishop so c6 and the structure resembled the Exchange variation. 8.g3 was an incredible novelty by Topalov, weakening all the light squares on the kingside but possibly angling for Nf3-h4-f5.

Bacrot thought that g3 was a normal move, but he criticised 9.Nd5 as “it is not attacking anything and can be easily pushed back”. He expected 9.Nh4 instead.

Black relocated the Knight from f6 to c6 and then a fine move 11…Be7 left white with an important decision to make. The point was that Nh4 is prevented and black planed to continue with Be6 attacking the exposed Knight on d5.

White immediately erred with 12.b4, allowing a nice tactical shot 14…Bxb4 which wins at least a pawn for black. Here became apparent that the novelty was a bit too extravagant, particularly in connection with b4 advance.

In one of the earlier rounds Topalov expressed his affection for b4 in the Spanish structures.

White took the pawn back but was forced to concede an exchange because with 20.Qf4 Qxf4 21.gxf4 c5 22.Nc2 f5! black has much better endgame, as pointed by the Frenchman.

28.Rd1 was better because black is not in time to activate with 28…Qd4 since there is 29.Nf5. Bacrot believes that his opponent missed 33…Qg5 and there was no more hope of salvation.

Unlike the other games with d3 in Ruy Lopez, Morozevich refrained from pushing b5 and instead castled with quick Re8.

Dominguez expanded with 9.d4 and then 11.d5 “because this is a principled decision as black is playing without b5.”

White got an extra pawn but black was well mobilised to strike in the center with his own 13…d5. Dominguez calculated that 14.exd5 Nxd5 would give good compensation to black and decided to keep the files closed until his pieces are regrouped.

Similar pattern after 18…f6, white simply passed 19.e6, giving the pawn back but getting some tempi to occupy dominant central squares. 19.exf6 Qxf6 would allow black pieces to spring into life.

White established strong presence on d4-square and already after 22.Bf4 it was difficult to suggest a good plan for black.

23…Be6 was a mistake that simply handed too much to white, who proceeded to convert the advantage with relentless precision.

Caruana intended to play the Marshall Gambit but Grischuk prevented it by quickly clarifying the central pawn structure.

The Italian was unhappy with his position from the opening and “he couldn’t remember how exactly he was supposed to play”. He moved 12…Bg4 planning to meet 13.h3 with 13…Nd4 but he realised it didn’t work to his favour.

Grischuk thought that it was better to play 14.a5, not allowing the black Knight to jump there. Later he missed the cute 17…Nd5 jump. It was nothing drastic though, and Caruana believes that 20.e5 was an interesting possibility, but Grischuk didn’t like it.

Grischuk pointed that 21.Nc4 would be met with nasty 21…Bxf2+, therefore he first moved away from the check 21.Kg2.

Caruana regretted that he didn’t take 22…Nxc4 because white’s next 23.Nce5 was very unpleasant and after 27.h4 it is already dangerous for black.

The opinions about the position after 34…Rg7 differed, Caruana said it was roughly equal, but Grischuk shook his head in disagreement – “…we should ask Kramnik what he thinks about this.”

40…Kh6 was a wrong side to move the King and Caruana said it is “nearly losing”.

Kasimdzhanov started with the Ruy Lopez Arkhangelsk variation but Ponomariov left the theoretical discussions side and continued with the quiet 7.Nc3.

The opening was very complicated and Kasimdzhanov later admitted -“I didn’t understand what was happening.” 12.exd5 surprised him, he thought that black should be okay, but somehow white started threatening to the kingside.

18.b3 was a surprise for black, he was mostly looking at the play on the kingside, but white simply wanted to fortify the d5-pawn. Kasimdzhanov thought that 18…Re5 and 19…Qd8 was a very clever defence, but he “misjudged the position because white could get something on the diagonal”.

26.Bxe1 “shocked” black. He took the dark-squared Bishop to move it to b4, but while his hand was still in the air, he realised that 27.Qb3 would win. Having touched the piece, he had to play 26…Bb6.

He was very happy with the move 28…Re3 as after Ponomariov’s 29.Qb2 the tactics work very well for black who attained two pieces for a Rook and an easier endgame.

But then FIDE Press Officer Anastasya Karlovich asked if white could have protected the Be1 with 29.Qa1. For the third time today Kasimdzhanov “was shocked” – “Can this really work? It’s good that I didn’t have to play you, Nastia!”

With hindsight, it turned out that Bf5 was slightly inferior but certainly not a blunder, and that Re3 did not have a devastating effect.

The endgame was very complicated and black’s plan was to put his opponent into zugzwang.

Around move 53 Ponomariov claimed a three-fold repetition, but he was mistaken and black was given additional three minutes on the clock. Kasimdzhanov said that he repeated some moves in order to reach 60 time control, but he was very careful not to allow draw.

Black proceeded to treat the endgame with precision and finally won a full point.