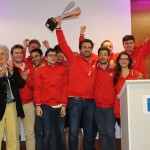 The 2018 Top 12 French Team Championship is taking place from 26 May to 5 June in Brest. The 12 best French teams play a single round-robin over 11 rounds. Each match is played over 8 boards, with teams choosing from a starting list of up to 16 players.
It is the strongest French team competition, and one of the best in the world.
Évry, Metz, Monaco, Clichy, Bischwiller, Nice, Mulhouse, Bois-Colombes, Grasse, Saint-Quentin, Tremblay-en-France and Vandœuvre are qualified this year. The winning club will be crowned French champion.

The Clichy team will try to keep the title that it has already won fifteen times in its history. Bischwiller, second last year and champion in 2015, should be Clichy’s main rival for the title.

For eleven days, Brest will be the capital of French chess, but the influence of the Top 12 goes beyond the French borders. With players from 24 different countries last year, including 61 grandmasters, the event has aroused the interest of chess players from around the world. The time control is 90 minutes for 40 moves plus 30 minutes to the end of the game, with a 30-second increment from move 1.