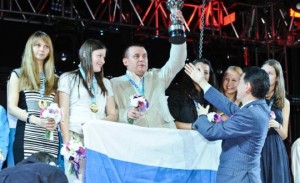 Chairman of the Board of the Russian Chess Federation Mark Glukhovsky confirmed in an interview with R-Sport that leading Russian Grandmasters will represent the country at the 41st Chess Olympiad in Tromso, Norway.

Vladimir Kramnik, Alexander Grischuk, Sergey Karjakin and Peter Svidler have all confirmed that they are ready to play.

The coaching committee will finally select the fifth player from the wider list.

In the women’s team the issue with Tatiana Kosintseva is still not resolved. Glukhovsky says there is hope that she could change her mind and decide to play. Nadezhda Kosintseva is not a candidate for objective reasons – she recently became a mother.

Kateryna Lagno should complete her transfer from Ukraine on time to play in the Olympiad.