This year’s Vienna Children Chess Festival was headlined by Veselin Topalov. The world champion of 2005 played a clock simul against the top U18 players from Austria, Hungary, Slovakia and the Czech Republic.

It was a hard fought and close match, and after four hours Topalov came out victorious 5:3, but he had to concede defeat to Hungary’s Richard Rapport and Austria’s best talent Martin Christian Huber, who is only 13. 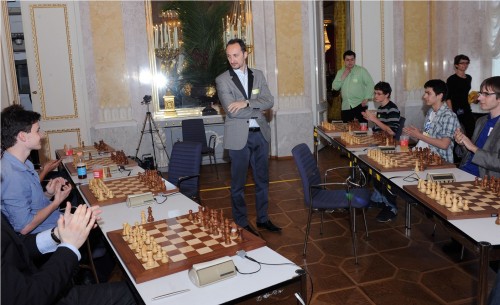 The junior players' welcoming applause for Topalov just before the match 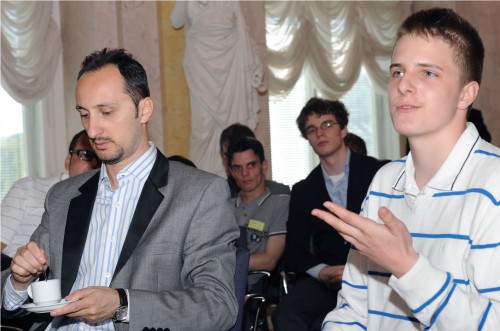 After the simul, while Topalov enjoys a coffee, Richard Rapport from Hungary explains how he just beat the former world champion

The match took place on 27th April in the Hall of Muses of the prestigious museum Albertina. The event had started in the morning with a strategy seminar on the chances which by the support of the European Parliament is creating for chess in schools.

Experts from eight countries attended the session. ECU President Silvio Danailov opened it with reflections on his lobbying effort at the European Parliament in Strasbourg. Jan Callewaert presented the strategy and next steps of the Kasparov Chess Foundation Europe, which he chairs and sponsors.

Malcolm Pein from the UK charity Chess in Schools and Communities brought useful suggestions to organise chess in school programmes and campaigns. Stanislav Vlcek reported on the Slovak experience with the FIDE programme “CIS 100”. 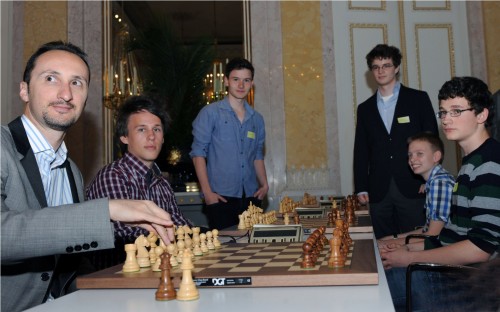 Topalov surrounded by Austrian juniors, including Martin Christian Huber, 13, who beat him (second from right) and Hungary's Kristof Juhasz (third from right) 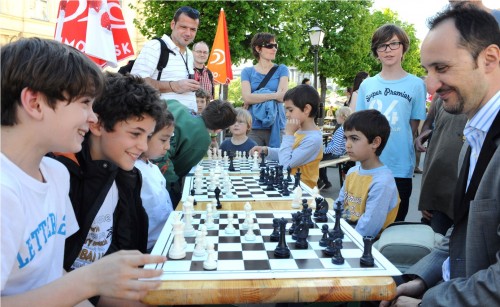 The meeting was chaired and organised by Stefan Loeffler from the Austrian charity Spielend Schlauer, whose aim is to bring chess into primary schools. 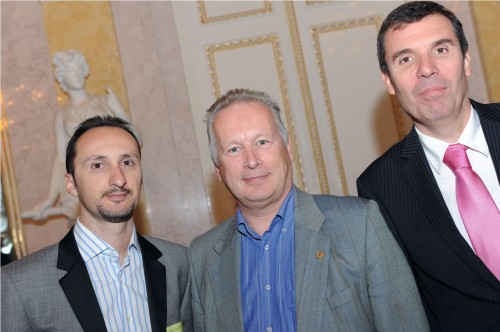