GM Wang Hao of China hurdled the challenge from GM Abhijeet Gupta of India in the penultimate round to win the championship with one round to spare in the 4th Al Ain Chess Classic at the Hili Reyhaan Rotana Hotel in Al Ain, UAE.

Wang scored an impressive 7.5 points in 8 rounds, out of reach of the second runners with 6 points. He thus clinched the trophy and the first prize of $13,000.

The former Chinese national champion crushed the Gruenfeld Defense of Gupta, the 2013 Al Ain Classic champion, in 41 moves. Wang controlled the center and Gupta had to exchange two Bishops for a Rook in order to free his position but lost in the endgame.

“This is my second time in Al Ain and my fifth tournament in the UAE. The organization is good and it is very nice weather here in December. Now in Beijing it is really cold,” Wang said after the round. 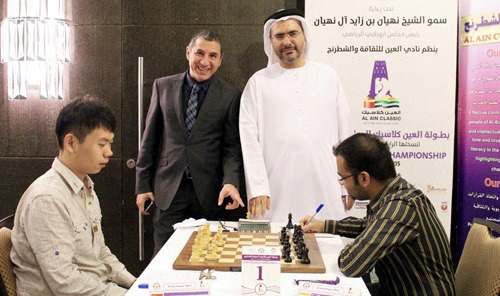 Fighting for the rest of the total prize fund of $57,000 are four players in second slot and 18 players a half point behind them.

Shirov and Kryvoruchko drew in 26 moves of a Ruy Lopez, the minimum number of moves required before a draw can be agreed. Pashikian, 28, former Armenian national champion, drew with Alexander Arehchenko of Ukraine in a marathon 72 moves of a Gruenfeld Defense. Oleksienko used the Sicilian Defense to beat Walter Arencibia of Cuba in 41 moves.

Tied at 5.5 points each are Gupta, Areshchenko, GMs Vladimir Onischuk, Yuriy Kuzubov, Zahar Efimenko and Martyn Kravtsiv of Ukraine, Levan Pantsulaia and Mikheil Mchedlishvili of Georgia, Hovhannes Gabuzyan, Robert Hovhannisyan and Zaven Andriasian of Armenia, Ahmed Adly of Egypt, Alexander Motylev, Alexander Rakhmanov and Sergey Volkov of Russia, Sergei Zhigalko and Sergei Azarov of Belarus and Viorel Iordachescu of Moldova. A record 56 GMs and 5 WGMs are among the 127-man field from 33 countries.

An Al Ain Amateur tournament is being held concurrently for players rated below 2000 with 72 players from 15 countries competing for $7,000 in cash prizes. Anisweud Sasikumar, 15, of India leads the Amateur event alone with 7.5 points followed within striking distance by compatriot Saji Adarsh with 6.5 points. Tied at 6 points each are local bets FM Marshool Hamdan and Marshool Mohamed of the UAE, Raffi Ghazaryan of Armenia and Ahmad Saeed Bondok of Egypt.