Russian Chess Federation has the honour to invite young and ambitious players from all over the world to take part in the final stage of prestigious chess competition among secondary school teams Belaya Ladya, also known as White Rook, which will be held in Hotel Dagomys 4* (Sochi, Krasnodar Region) on June 1-9, 2017.

Belaya Ladya national school team tournament was launched in 1969 in the Soviet Union. Some of the famous Russian players started their career playing in Belaya Ladya. 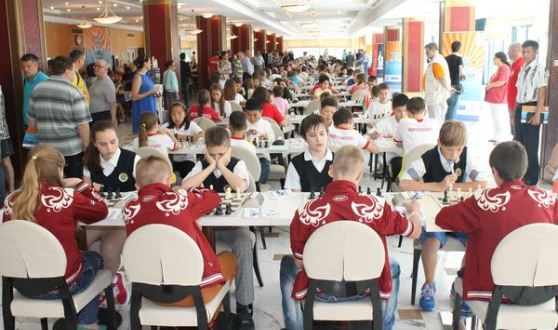 In 2015 six foreign teams from Armenia, Belarus, Israel, Kyrgyzstan, Moldova and Mongolia participated in the White Rook along with Russian players (there were 73 Russian teams).

In 2016 the number of participating foreign teams increased to 9. We are convinced that in 2017 there will be much more foreign teams. As the Organizers we strongly believe that such experience not only improves children’s playing skills during the competition but also helps to discover the world and meet new friends.

The tournament is supported by Russian Ministry of Sports and the Ministry of Education and Science. RCF has certain requirements for the participants.

1. Each team should consist of 5 people: 4 players (at least 1 girl should be included), born in 2003 and later, and 1 trainer;
2. Only teams from secondary schools can participate in the competition. Youth National Teams, chess clubs, houses and palaces of sports as well as teams combined of two or more educational institutions are not allowed to participate;
3. The winner in your country may be determined in one or several stages at your choice. Please attach the official results of the national championship among school teams to the application in order to participate in the Belaya Ladya competition.

RCF will provide accommodation with full board during the tournament to the five members of every team; travel expenses will be at sending side expense.

Please fill out the application form and send it to the following email addresses: juniorchess@ruchess.ru and ks@ruchess.ru before April, 14th of 2017 (if you need visas for visiting Russia) and before May, 1st of 2017.