The Bulgarian went for the Chebanenko Variation (with 4…a6; also called the Chameleon Variation sometimes), which she didn’t use for a long time.

Nevertheless, Ushenina was not caught by surprise. White played very well and got a small advantage. In an attempt to activate her pieces, Black carried out a pawn break in the center, which turned out very risky. 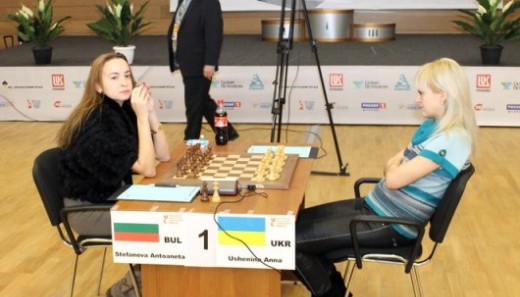 White replied with an interesting tactical operation, trading two minor pieces for a rook and two pawns. Formally the material was still equal, however, White got a clear advantage: Black’s pieces were badly coordinated, and her king became weak.

Soon White advanced the passed pawn, and her position became overwhelming. Stefanova got into a time trouble and was unable to defend perfectly.

Instead of seeking the vital counterplay on the kingside, she decided to play passively, which turned out to be a decisive mistake. Ushenina converted her advantage flawlessly, not giving her opponent any hope. Black resigned on the 37th move.

Anna Ushenina: “It was an interesting game. I decided to trade two pieces for a rook, and it led to wild complications. However, somehow I managed to get an advantage.”

By winning this game Anna Ushenina took the match lead – 2-1. The fourth game (and the last one with a classical time control) is scheduled on Friday, November 30th. Antoaneta Stefanova plays White and needs a win to stay in the match.